Oil rigs dating from the late-1980s are still in operation in the Gulf, just off the coast of Dauphin Island, Ala.
GALLIANO, Louisiana—On June 10, 1947, Stanolind Oil & Gas Co. won an auction for the right to drill for oil on a plot seven miles off the Louisiana coast. The company built a spindly steel platform and drilled a well in shallow waters. It struck oil, and in 1950, Stanolind sold its first Louisiana sweet crude for $2.67 a barrel.
More than 60 years later, the West Cameron 45-A platform is, according to government records, the oldest functioning platform in federal waters in the Gulf of Mexico. One of more than 100 structures built in the 1940s and 1950s still in operation, the platform has survived seven Category 2 hurricanes and a major fire.


Growing Old in the Gulf 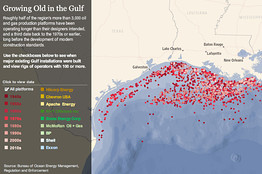 See when major existing Gulf installations were built and view rigs of operators with 100 or more.
The platform's age may have taken a toll, however.
On Dec. 4, 2009, a severely corroded pipe connecting the structure to a high-pressure gas well gave way during routine maintenance, releasing explosive natural gas into the air. Unlike most modern platforms, this one had no remote shut-off switch. Emergency valves that should have cut off the flow of gas automatically didn't close properly—in part, a subsequent investigation found, because a control panel was caked in bird droppings. Workers who had fled by boat to a nearby platform were finally able to shut down the well.
The deadly explosion of the Deepwater Horizon drilling rig in April set off a fierce battle over deep-sea oil drilling aboard huge, state-of-the art vessels. But that debate has largely ignored what many experts say could be a bigger threat: The troubled state of offshore infrastructure that remains in place long after wells are drilled.
High-tech drilling rigs make up only a small piece of the Gulf's energy infrastructure, a vast network of tens of thousands of fixed wells, hundreds of permanent platforms and thousands of miles of undersea pipelines. This network together accounts for nearly a third of the oil produced in the U.S. and more than 10% of the natural gas.

Much of that infrastructure is decades old. Roughly half of the Gulf's more than 3,000 production platforms are 20 years old or more, and a third date back to the 1970s or earlier, long before the development of modern construction standards. More than half have been operating longer than their designers intended, according to federal regulators.
Older structures are more prone to accidents, especially fires, and more dangerous for workers. According to a Wall Street Journal analysis of federal accident records, platforms that are 20 years old or more accounted for more than 60% of fires and nearly 60% of serious injuries aboard platforms in 2009.
"There is an infrastructure issue confronting the industry," says Charles Swanson, a managing partner with Ernst & Young's Oil & Gas Center in Houston. "We're reaching a point now where we're not going to be able to ignore it any longer."
Platforms are subjected to extreme ocean currents, corrosive salt water and frequent hurricanes. Unlike drilling rigs, which are mobile, platforms can't be brought to shore for repairs. Many are so old or have changed hands so many times, that maintenance records are missing or unreliable. And experts say that maintenance work has often gotten short shrift in an industry focused on new discoveries rather than old, declining fields. 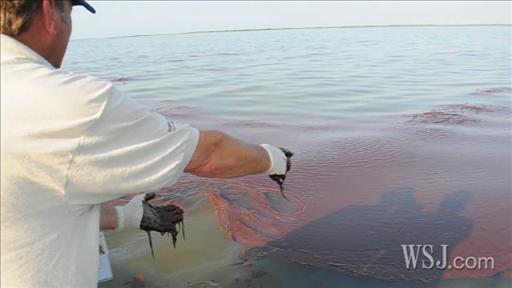