A Wide Open Weblog for Big News, the Big Picture
A bona-fide member of the Fifth Estate, practicing Mobile Journalism (MoJo) every chance we get...

Who Should the People of the Gulf Coast Trust for Payback?

August 28th, 2010 The Federal Government or the State Court System? 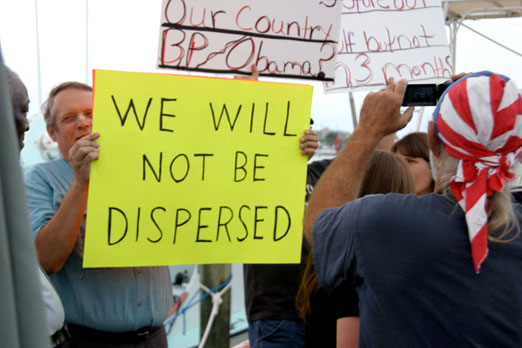 David Underhill of the Mobile Alabama Sierra Club protests BP in Panama City, Florida
Legal Analysis
by Glynn Wilson
David Underhill of the Mobile Alabama Sierra Club, who recently protested a public forum sponsored by the U.S. Department of the Interior by wearing duct tape over his mouth since citizens were not allowed to speak like they should have been in a real democratic town hall public hearing, was also party to a stakeholders meeting August 17 with officials from national and local government agencies and environmental groups as well as the British Petroleum corporation.
There were already so many public complaints about the lethargic nature of BP’s response to paying claims to individuals and businesses along the Gulf Coast that the Obama administration stepped in June 15 and seized $20 billion of the oil company’s money, to make sure people receive compensation for losses suffered due to the largest and worst environmental disaster in American history.
By June 16, less than two months after the Deepwater Horizon oil rig blew up in the Gulf of Mexico April 20, killing 11 workers and spreading it’s crude all over the Gulf from the Louisiana marshes to the beaches of Mississippi, Alabama and Florida, President Barack Obama appointed Washington attorney Kenneth Feinberg to act as the arbitrator to lead an independent team to oversee paying out claims from the new $20 billion escrow fund.
But the question on Underhill’s mind at the August 17 meeting was whether Feinberg could truly be independent and fair if he is being paid by BP. So he tried to get an answer from one of the BP representatives at the meeting, Gary Willis. Clearly there is not much trust of BP on the Gulf Coast, since the company has lied time and time again about the amount of oil leaking into the Gulf, about the use of chemical dispersants, even about who has the power to control access to oiled beaches.
The answer Underhill got from the BP official was “fuzzy,” he said, so he and Casi Callaway of the Mobile Baykeeper did a followup interview with BP public relations representative Sam J. Sacco.
In an e-mail exchange obtained exclusively by The Locust Fork News-Journal, Sacco said: “A question was asked by one of your members at the Aug. 17 COAST meeting as to whether BP was paying the appointed claims administrator, Mr. Feinberg,” Sacco said. “The answer to that question is yes.”