June 20th, 2011 According to BP ads and the lamestream media, including local newspapers and television news outlets that have taken millions of dollars in advertising money from BP, the Gulf of Mexico is now “clean” only a year after being polluted on a massive scale by the BP oil spill of 2010, the largest and worst mand-made environmental disaster in American industrial history.
The only problem is, it is NOT true. According to this video by Trisha Springstead with Captain Lori Deangelis of Dolphin Queen Cruises, the oil and chemicals are still showing up.

For more information, check out this Website on Poisoned Earth, Poisoned Bodies. 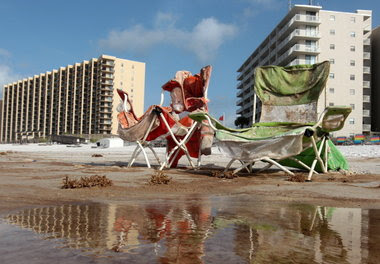 View full sizeIn this July 7, 2010, file photo, oily sand covered beach chairs sit idle on the beach in Orange Beach Ala. The oil washed ashore with the tide overnight, leaving an ugly stain that brought out hundreds of BP workers to clean. One year after the spill, environmentalists differ on the lingering effects from the spill. (AP Photo/Dave Martin)
Questions about the severity of the Gulf oil spill’s environmental impact have divided officials along state lines and are now creating discord even within coastal Alabama.

Data collected so far show that the spill’s effects have been "minor" east of Louisiana, according to George Crozier, executive director of the Dauphin Island Sea Lab.
Crozier, whose research lab was granted $5 million by BP PLC last year to coordinate environmental studies, said "I would love to screw BP with their own money." But, he said, "I can’t bring myself to exaggerate effects that I can’t document."
Crozier, who announced Friday that he will retire from the Sea Lab later this year, expressed frustration over a letter sent by environmental groups last month to top Obama administration officials. The letter warned of a "growing health crisis" because of the spill. Such claims are unsubstantiated and harmful to the Gulf fishing industry, Crozier said. 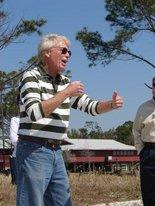 View full size George Crozier of the Dauphin Island Sea Lab: "I would love to screw BP with their own money." But, he said, "I canâ€™t bring myself to exaggerate effects that I canâ€™t document." (Press-Register File Photo)
Casi Callaway, whose Mobile Baykeeper group signed on to the letter, said that while it would be irresponsible to "cry wolf," it would also be irresponsible to conclude, "We have no problem; it’s over."
"I am not telling people that we’re sick and dying, and every animal is dead and gone," she said. "I do believe that it is critical that we keep studying."
An estimated 206 million gallons of crude gushed into the Gulf last spring and summer after the Deepwater Horizon rig exploded and sank in waters southeast of Louisiana, killing 11 workers.
It quickly drew comparisons to the 1989 Exxon Valdez disaster immediately off the Alaskan coast. The Valdez spilled 11 million gallons of oil, but the environmental consequences appear to have been much more devastating, Crozier said.
The fact that the ruptured Gulf well was 5,000 feet underwater and many miles from most shores greatly reduced the potential damage, as did the natural ability of the Gulf ecosystem to consume oil, Crozier said.
Callaway cautioned that it’s too soon to judge the spill’s lasting impact. "We don’t know what the long-term environmental effects are going to be," she said.
Callaway, Crozier, and many across the Gulf agree on at least one point: Louisiana received the most severe environmental blow. Other Gulf states, such as Alabama, were harmed economically, in large part, through losses in tourism and fishing.
The distinction is significant in light of the $5.4 billion to $21.1 billion in Clean Water Act fines expected to be assessed against BP and other parties responsible for the spill.
Lawmakers in Washington are working on a bill to send most of the fine money to the affected Gulf states. But they have bogged down on several points, perhaps chief among them: How much money is doled out for environmental vs. economic restoration, and how much each state receives as a result.
Callaway urged that lawmakers consider both environmental and economic issues in deciding the question. But once states get their money, she said, they need to devote most of it to environmental recovery.
"The economic impact was caused by an environmental disaster, and if we’re going to fix it, we’re going to fix it by fixing our environment," she said. 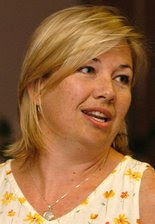 View full sizeCasi Callaway: "I do believe that it is critical that we keep studying." (Press-Register File Photo)
Rep. Jo Bonner, R-Mobile, expressed concern that Alabama groups pressing for an environmental emphasis could effectively be arguing for the fine money to go elsewhere. "They may well be writing Alabama out of anything," Bonner said.
An aide to Sen. Richard Shelby, R-Tuscaloosa, said that Shelby is working on a compromise that would give states flexibility in deciding whether to spend on environmental or economic projects. Still, the aide anticipated that the majority of the fine money would go to the environment.
Crozier said he agreed with Callaway that more scientific study is needed, but bristled at what he perceived as a rejection of his findings to date.
It’s useful for Callaway’s fundraising purposes, he said, to depict a dire situation in the Gulf. "I am suspicious of the motives of the people who are afraid to accept the fact that we have so little short-term environmental damage," he said.
Callaway, in turn, questioned Crozier’s motives, noting that oil companies help underwrite the Dauphin Island Sea Lab Foundation.
"It helps George’s fundraising to say we don’t have any damage," Callaway said. "We’re not saying we have damage. We’re asking if we do."
Posted by John L. Wathen at 5:50 PM 4 comments: Links to this post