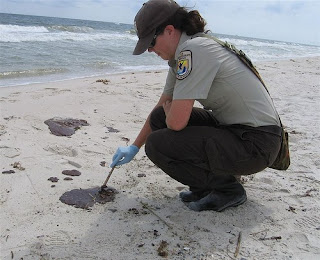 A 40,000-pound tar mat unearthed in the surf off Grand Terre island is a sign that three years after the Gulf oil spill, the disaster continues to affect the Louisiana coast, state and environmental officials said Wednesday.

Grand Terre is an uninhabited barrier island east of Grand Isle. The tar mat, which was 165-feet long by 65-feet wide, was a mixture of sand, shells, oil and water. It was removed over a period of a few weeks.

Coastal Protection and Restoration Authority Chairman Garret Graves said the tar mat is evidence that BP’s cleanup along the Louisiana shoreline has been insufficient.

“Continuing to find oil mats in our shoreline proves that our concerns are warranted,” Graves said.

Louisiana officials have repeatedly voiced concerns about buried oil being left behind.

A joint statement from environmental groups, including the National Audubon Society, the National Wildlife Federation and the Environmental Defense Fund, says Louisiana’s vital barrier islands, which are in jeopardy due to coastal erosion, took the brunt of the damage from the oil disaster.
“Barrier islands provide a first line of defense against storm surge, protecting communities and habitats, and they are also nurseries and breeding grounds for many species of Gulf fish, wildlife and migratory birds,” the statement says. “BP misleads audiences when it declares cleanup victory in the Gulf. It may try to sweep this recent news under the rug, but it’s going to take a pretty big broom to hide a 40,000-pound tar mat.”

Reports say the tar mat was made up of 15 percent oil and 85 percent sand, shells and water. But the entire mat itself was considered hazardous and had to be removed from the area, the groups point out.

Local officials have said BP and the Coast Guard have responded to concerns about buried oil and tar mats, sampling the beach by drilling augering holes to look for oil under the surface sands and sending scuba Shoreline Cleanup Assistance Teams to probe in the wave line for submerged oil mats on Fourchon Beach. Tar balls and tar mats have washed up regularly on the beach since the spill.

Terrebonne Coastal Restoration Director Nic Matherne said the parish has been working with the state to receive bimonthly briefings on ongoing cleanup efforts.

“There’s so much oil we’ll continue to uncover oil for years. We’re staying informed and staying on top of the issue,” Matherne said.

He added that officials have to balance the need to unearth buried oil with preventing damage to sensitive habitats like barrier islands.

“We’ve worked with the Coast Guard and the incident management team to stay informed of their modelling on wave action and where they are most likely to surface, and that’s an ongoing effort,” Matherne said.

Graves said responders have cleaned up 2.8 million pounds of oil in Louisiana this year alone.

“That’s 99 percent of all the oil removed in the Gulf,” Graves said.

Graves cited statistics that more than 1 million barrels of oil still remain unaccounted for since the spill.

“That’s five times the Exxon Valdez spill,” he said. “We can’t just wait for it to come to shore. Most importantly, we’re only seeing this oil on the beaches we have in Louisiana. What’s happening in our wetlands?”

He called for BP to set up a proactive monitoring system that can identify tar mats offshore and collect them before they wash in.

Staff Writer Nikki Buskey can be reached at 448-7636 or nicole.buskey@houmatoday.com.
Posted by John L. Wathen at 4:35 PM 4 comments: