1,000-pound tar mat is being cleaned up on Fort Pickens beach.

Nearly four years to the day when BP oil began soiling our beaches, a 1,000-pound tar mat is being cleaned up on Fort Pickens beach. (Pensacola News Journal) 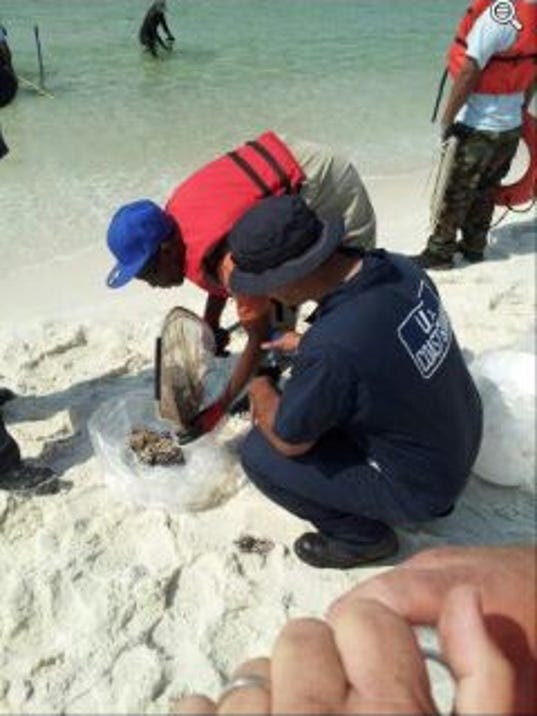 (Photo: Special to the Pensacola News Journal )
1098 CONNECTTWEET 2 LINKEDINCOMMENTEMAILMORE
A U.S. Coast Guard pollution investigation team is leading another day of cleanup of a tar mat discovered Friday on the beach at Fort Pickens.
So far, the team has removed about 960 pounds of the mat, which is about 8 to 10 feet off the shoreline in the Gulf of Mexico, just east of Langdon Beach, Coast Guard spokeswoman Lt. Cmdr. Natalie Murphy said
Mats are made of weathered oil, sand, water and shells.
Monday marks the fourth anniversary of when the oil from the April 2010 Deepwater Horizon oil spill disaster finally arrived on waves slicking our beaches. Tar balls and a frothy brownish-orange petroleum product called mousse, however, arrived earlier that month.
The mat was discovered on Friday by a Florida Department of Environmental Protection monitor who surveys area beaches routinely looking for lingering BP oil.
"The weather plays such a big factor in this," said Murphy. "Friday we got the cleanup crew out there and could see it (tar mat) visibly and attacked it. Then the thunderstorms came in, and they had to stop."
By the time the crew returned Saturday, the mat was reburied under 6 inches of sand, and it took the crew a while to relocate it using GPS coordinates taken Friday, she said.
With the mat located in the surf zone, it's harder to clean up.
"It's always a battle with Mother Nature," Murphy said.
The team returned today and plans to return Monday and for as many days as it takes to excavate the entire mat with shovels, although Murphy said it appears by the smaller amount excavated today they may be getting close to collecting all of it.
But the team will survey about 100 yards east and west of the mat to make sure none is still buried in the sand.
This mat is located about half a mile east of where a mat containing 1,400 pounds of weathered oil was cleaned up in March.
Cleanup is being conducted by a joint effort between BP, the Coast Guard, Florida Department of Environmental Protection and National Park Service.
It will take about a week for test results to confirm whether the oil is from the Macondo well that exploded April 20, 2004.
More than 200 million gallons of crude oil spewed into Gulf in 2010 for a total of 87 days before the Macondo well head could capped, making it the biggest oil spill in U.S. history.
Ironically, the discovery of the near-shore mat comes at a time when the National Park Service has stepped up efforts to search out suspected tar mats farther offshore.
Mats are believed to be submerged in the Gulf of Mexico waters off the seashore's Fort Pickens and Johnson beach areas.
Since April, a specialized team of underwater archaeologists has been scanning the waters looking for areas that might have trapped oil when it began washing up on our beaches four years ago on Monday.
Friday's discovery is not related to the dive team's hunt for oil, although the Coast Guard is testing several samples the team discovered to see if it is oil and, if so, whether it's from the ­Macondo well, she said.
Murphy urges the public to report any tar mat, tar ball or anything they suspected BP oil to the National Response Center hotline.
Report tar balls
Report tar ball, tar mats or anything that looks like oil pollution to the National Response Center hotline 800-424-8802.
Posted by John L. Wathen at 1:55 AM