"Crossposted from Bridge The Gulf" 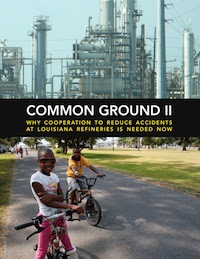 After Hurricane Gustav in 2007, north Baton Rouge residents were left without electricity for nearly two weeks. Across the street at ExxonMobil’s Baton Rouge refinery, the second largest refinery in the country, workers were dealing with their own mess.
The refinery hadn’t properly shut down before the storm and, as a result, a cooling tower that was still operational toppled over in the winds. More than 500,000 pounds of pollutants were released to the flare, burning for 12 days.
That accident put refinery workers in danger and the fumes and pollutants coming off the flare added another burden to nearby residents. They couldn’t stay inside because of the loss of power and stifling heat, and they couldn’t stay outside because of the toxic chemicals billowing from the refinery.
The accident resulted in a fine from the Occupational Safety and Health Administration and the refinery was required to submit an accident report to Louisiana’s Department of Environmental Quality.
It was one of 2,607 accident reports submitted to LDEQ by the 17 refineries in the state from 2005-2009. The facilities are required to submit them to state authorities within seven days of an accident. But they are rarely as detailed as the story told above. In fact, 20 percent of those reports listed “No Information Given” as the cause of the accident.
Those were the findings of several months’ worth of research and information requests to LDEQ from the Louisiana Bucket Brigade. The analysis of these reports is being released today in partnership with United Steelworkers, the Environmental Working Group and five groups of refinery neighbors across the state.
It’s called Common Ground II: Why Cooperation to Reduce Accidents at Louisiana Refineries is Needed Now (download it at labuckebrigade.org), and it exposes problems of deferred maintenance, poor storm preparedness and excessive flaring resulting in more than 21 million pounds and 22 million gallons of toxic emissions across the state over five years.
As a result of slashing refinery workforces and deferred maintenance, problems with pipes and equipment are left unchecked or temporarily fixed. In 2009, OSHA cited Chalmette Refining for ignoring nine safety recommendations on piping, something the refinery hadn’t addressed through six years of citations.
These are disturbing trends in the oil industry – lessons Gulf Coast residents hoped were learned after the BP oil spill. But industry leaders and refinery officials don’t seem to want to address the accident problem, nor do they seem interested in installing emissions reduction technology or other measures that can actually save product during an accident, rather than burn it off at the flare.
In California, refineries saw an 85 percent decrease in emissions thanks to better flare management practices. Dow Chemical in Texas saved $2.5 million worth of product from 2001-2003 by installing flare recovery systems. And the neighboring communities faced less of a health risk as a result.
The groups involved in this study hope refineries seriously consider these recommendations (again, all based on accident reports submitted by refineries), and are calling on refinery officials to work with communities in fixing the problem.
For more on this report, see Louisiana Bucket Brigade’s web site. Also, check out LABB’s Refinery Accident Database, which catalogues all the accident information from 2005-2009.
Benjamin Leger is the monitoring and evaluation specialist and m
Posted by John L. Wathen at 11:19 AM