We’ve noted them individually but let’s connect some dots, because three huge news items are making the rounds that support claims that BP’s massive dispersant use hid much of its spill by sinking the oil to the sea floor.
Here’s how a few big relevant stories broke recently (then we’ll get to our troubling new test results):
We should note that royal red shrimp are caught in deep water by dragging nets along the ocean floor.
A recent Times-Picayune report quoted NOAA’s Roy Crabtree, the assistant administrator for the federal Fisheries Services southeast region: “We are taking this situation seriously. This fishery is the only trawl fishery that operates at the deep depths where the tar balls were found and we have not received reports of any other gear or fishery interactions with tar balls.”
The closure area was re-opened to all fishing on Nov. 15. And remember those smell tests? Government officials used the infamous “sniff” test on shrimp, reportedly including royal reds, and the seafood passed the tests. As we’ve noted before, not everybody thinks those tests are worth much.
So, clearly, a lot of the oil sank to the bottom of the Gulf. Thousands of square miles are in question and literally tons of seafood. So much for the official declaration that “the vast majority of the oil is gone” and that Gulf seafood is safe for human consumption. Remember, earlier this week Navy Secretary Ray Mabus pressed all the military services to consume as much seafood as possible.
Before that happens, we should all take a look at the new test results below before bellying up to the raw bar. Our research team got this royal red shrimp sample (see below) in October from a commercial boat fishing west of the Macondo well site in Gulf waters legally open to fishing.
Sample description: Royal Red Shrimp
Sampled on: October 2010 by a commercial fishing captain
Sample location: West of spill site (see map below)
Testing by: ALS Laboratory of Edmonton, Alberta, Canada
This shrimp sample was collected by a commercial fishing boat captain in legal open Gulf waters (see map below). The petroleum hydrocarbon chromatogram of the royal red shrimp was a strong match to petroleum hydrocarbons found in the sea water sample that was taken at the same time and place as the shrimp sample. The top chromatogram is for TPH in seawater, while the lower chromatogram is for the royal red shrimp. The shrimp had total petroleum hydrocarbons at 439 mg/Kg, (PPM), and 58 ug/Kg, (PPB), of naphthalene, a PAH. Additional shrimp samples from Pensacola, FL, had up to 6,520 mg/Kg, (PPM), petroleum hydrocarbons. Shrimp in commerce in Louisiana had up to 8,356 mg/Kg, (PPM), petroleum hydrocarbons, and 17 ug/Kg, (PPB), of PAHs.
These are UNACCEPTABLE levels of contamination for shrimp entering the human food chain.
See lab report here: Royal Red Shrimp Data 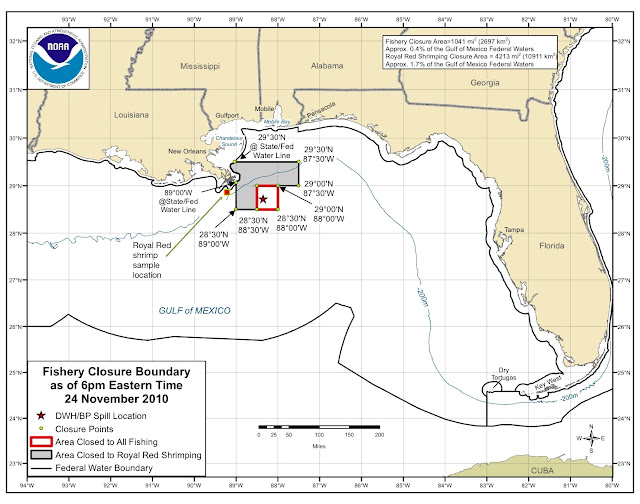