Since the blown-out well at the Mississippi Canyon 252 Macondo site has been capped and the cleanup operations in the Gulf declared a success, BP has summarily fired thousands of workers without notice who were left unemployed as a result of the disaster. Local, state and federal agencies have been working to present a picture of normalcy, declaring the seafood safe to eat, the beaches clean and the water free from oil. The actual situation along the Gulf Coast is far from normal, with many people evacuating due to sickness and financial distress. Independent scientific reports continue to conclude the safety of the seafood is questionable at best, the beaches remain thoroughly contaminated, and the majority of the oil and dispersant is still in the water column or at the bottom of the Gulf.
Upon arriving back on the Gulf Coast three weeks ago, the first thing we found were containers of Nalco Corexit, which according to BP, the Coast Guard, NOAA and the EPA has not been used since mid-July. On the ferry boat to Dauphin Island on Aug. 25, we had the pleasure of being photographed by a Coast Guard Officer whose job was to record everyone traveling on the ferry and also the license plate numbers on all the vehicles. The officer said he could not discuss the spill but did relate his enthusiasm to return home to his family on the East Coast. Shortly after arriving on Dauphin Island we found numerous containers of Corexit and were treated to yet another day of constant surveillance by two Sheriff's Deputies, a local police officer, and what appeared to be a DHS officer in the ever-present black SUV. We discovered the Corexit in two locations on the island, one of which was a privately owned marina whose owner demanded we leave immediately. The pictures below of containers with Corexit 9500 at the private-owned marina were taken next to the highway on a local's bicycle with a Sheriff's deputy pulled up with his siren blaring and lights flashing. The next day the containers were gone. 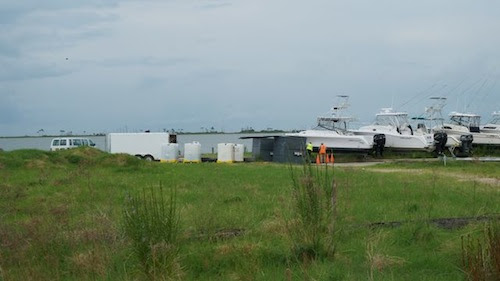 The following week we went back to Dauphin Island and spoke to the Mark Smith, BP Deputy Branch Director in charge of the operations on the island, regarding the presence of Corexit on the island.

Two nights earlier on Aug. 23, a local resident found containers clearly labeled 9527 at Bayou La Batre. According to official statements, Corexit 9527 supplies were depleted in May and has not been used since then. The BP/Coast Guard operations using the Corexit dispersants 9527 and 9500 have been the subject of intense criticism. Initially, BP, the Coast Guard, NOAA, and the EPA admitted to using the more toxic 9527, which contains 2-butoxyethanol, in concentrations exceeding 50% of the dispersant. 2-butoxyethanol is known to bioaccumulate in the marine food chain. The effects on marine life and human health can be devastating. One senior staffer to a US senator agreed that the use of more than two million gallons of Corexit in the Gulf is "the largest experiment ever conducted on a civilian population without their knowledge or consent in history." 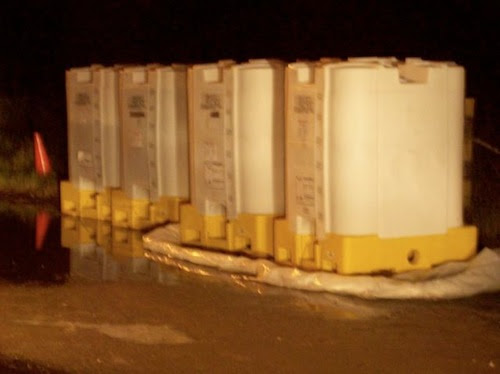 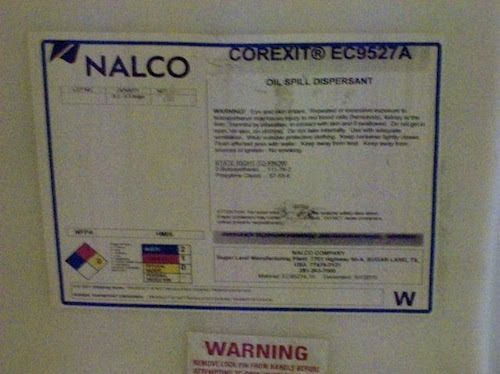 Mike Fischer, who for years was dockmaster at the Bear Point Marina, witnessed dispersant being sprayed over lagoons surrounded by civilian populations. VOO (Vessels of Opportunity) deckhands and captains witnessed dispersant being deployed less than one mile off the Alabama and Mississippi Coasts as late as mid-September from small skiffs and planes flying at night without lights. This brings into question official statements by BP, the EPA, and the Coast Guard, who have claimed that no dispersants have been deployed since mid-July, aside from a very small amount, and that they were never used within three miles of shore or on inland waterways (unless approval was obtained).
In fact, there are numerous accounts of the Corexit dispersant being used on inland waterways, lagoons, and bayous. Margaret Long, a resident of Cotton Bayou in Alabama paid to have independent tests done on soil and water samples taken from her property. The results showed high concentrations of markers for Corexit. The official excuse repeatedly used to explain the 2-butoxyethanol in test results that it can be found in many household products is nothing short of absurd. It is simply not plausible to postulate that enough detergent or shampoo or hand lotion has been dumped on Margaret's property or in Cotton Bayou to elevate levels to what was confirmed. Below are the published test results. 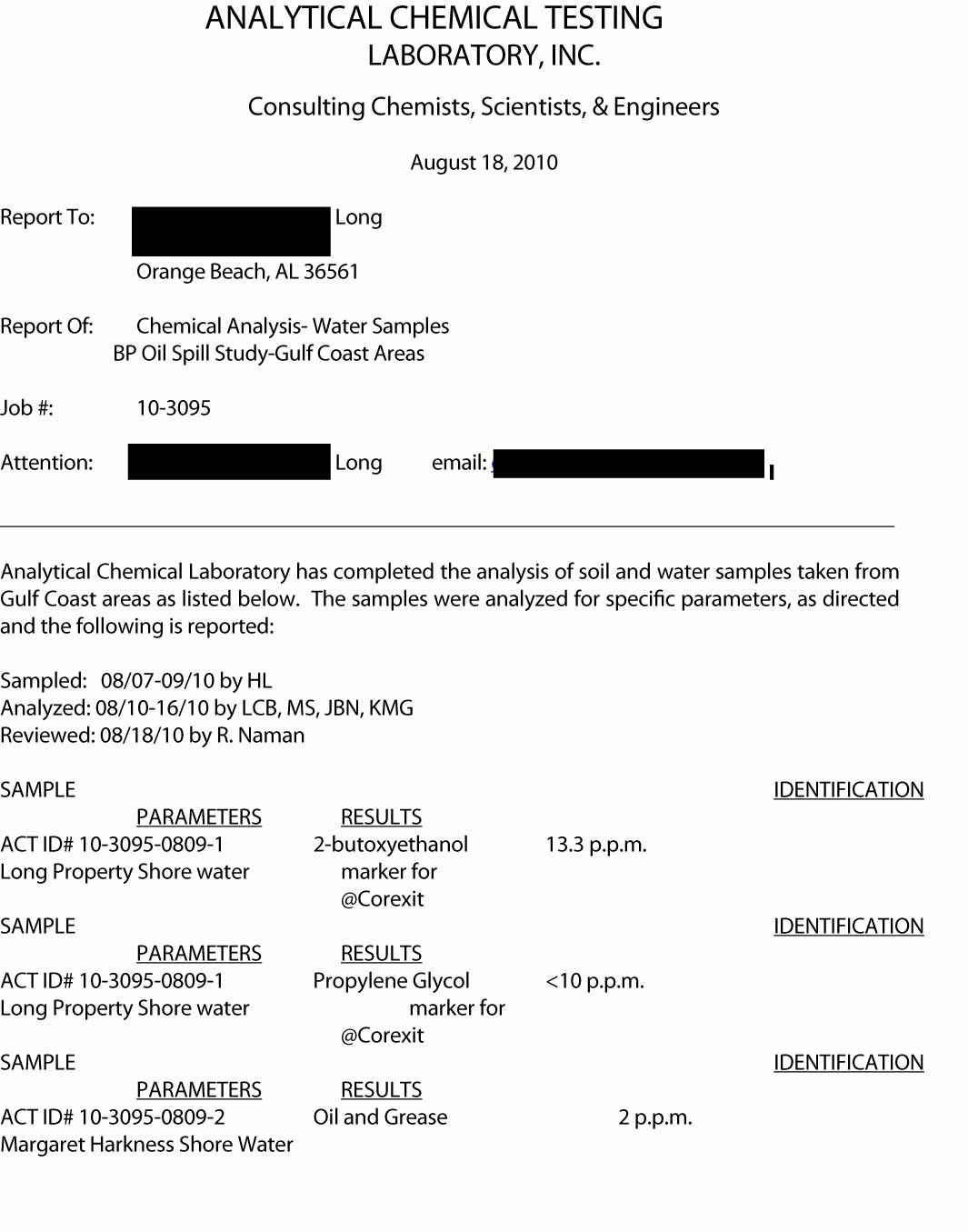 One of the fisherman who was enlisted early on the week immediately after the April 20 blowout spent up to 20 days at a time out on the water at the source. He and his coworkers were later assigned to the VOO program and and spent their days closer to shore spotting oil. All of these workers experienced various health issues indicative of chemical exposure. Initially they were given no Hazmat training or protective equipment of any kind. When BP and the US Coast Guard began spraying the Corexit dispersants, the boats in the area were instructed to move out of the area, but not so far that they could not visually observe the planes spraying from the air. In August and September they witnessed skiffs and barges dumping dispersant within one mile of the beaches along the Alabama coast. In one known case of extreme incompetence, Corexit was sprayed directly on a boat full of workers. The entire crew of the vessel was hospitalized and remain on disability. Many of these individuals previously would not speak out on any aspect of the spill, but as BP has terminated the VOO and all programs providing desperately needed employment for locals, they are now voicing their anger and disgust. Note to BP and other petroleum companies, if you really want to keep the workers silenced, be sure to continue to pay them for several months after the initial dirty work is done.
For months now there has been ongoing speculation as to why the federal government through the EPA and the US Coast Guard allowed the toxic dispersant to be sprayed across the Gulf when every NATO ally has banned its use as well as virtually every other coastal country in the world. The Corexit dispersants are highly toxic, especially when combined with oil and bioaccumulate in the food chain, making marine life tenuous and adversely affecting the long-term health of residents along the coast. What they do accomplish is sending the oil down the water column so that from the air it is virtually invisible. As with most other aspects of "cleanup" operations related to the blowout, appearances were far more important than reality, and the images shown on national media to the public of overriding concern. Clearly one factor in these decisions was allowing BP to not lose their investment in the drilling site and to collect some portion of the oil exploding from the wellhead.
More insight into the motivation for possibly not sealing the well early and creating an acceptable face for media consumption was provided by John Bean, who was a supervisor for one of BP's main subcontractors P2S. Mr. Bean's responsibilities included supervising more than 450 cleanup workers for a large portion of the resort beaches in Alabama and cleanup operations at "Green Acres," the command center in Gulf Shores; which, not coincidentally, was leased by BP from the private owner, Gulf Shores Mayor Robert Craft's family estate. While taking a break at the Green Acres command center, Bean overheard a conversation between two men both with satellite phones.
One of the men told the other that "the numbers are in," and that BP had collected enough oil from the spill to cover 100% of the costs resulting from the spill.

Taylor Hood was also employed in the VOO program. Hood and his fellow crew members were accompanied by an older gentlemen from Arkansas who was in charge of air monitoring for their vessel. After repeatedly coming up with negative readings when they were surrounded by oil, Taylor and his shipmates, just for "shits and grins," had the official place his device directly down close to the water over a large patch of oil. Not surprisingly, the device showed zero on whatever it was calibrated to measure. Situation normal. Far from being an isolated incident, these firsthand accounts of intentional deception and cover-ups are endless.
Reports of continued fish kills numbering in the hundreds of thousands continue to come in along the Gulf Coast, especially in southern Louisiana. A large number of fisherman refuse to sell their catches and feel it unconscionable to represent seafood coming out of the Gulf as safe for human consumption. Oyster beds are dead and dying with the offspring unable to survive due to changes in membrane viscosity caused by the dispersant. Several owners of private oyster farms see the end of their family businesses, which had been a mainstay for the coastal economy for generations. Among the coastal communities sickness from chemical exposure, suicides, depression, bankruptcy, and involuntary relocation/evacuations are now commonplace occurrences. The vast majority holds not only BP responsible, but the federal government as well. The government allowed BP to dictate the response to the spill and was instrumental in assisting BP in not only covering the Gulf with toxic dispersants but subsequently covering up the horrible realities of what it has done to the marine ecosystem, the health of US citizens along the coastal region, and the countless lives that have been destroyed.
Follow Jerry Cope on Twitter: www.twitter.com/jercope