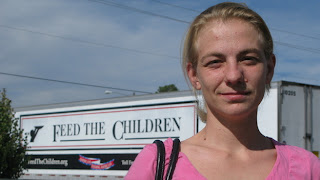 Homemaker Lena Hofer, 25, recently went to the community center in Bayou La Batre, Ala., for free food and household goods — and was reluctantly turned away by volunteers when Feed the Children ran out of supplies. "It's really hard when they send you away after you [ask for food], especially when you need it like I do," she says. "I'm about to cry."
These are hard times in the hard-working town of Bayou La Batre, Ala. It's known as the state's seafood capital — and it struggled to get back in business after Hurricane Karina.
But once again, the processing plants and shrimp boats lining the bayou are mostly idle after the BP oil spill.
So when Feed the Children trucks recently arrived at the community center, the turnout was huge. About a dozen volunteers worked quickly handing out big cartons packed with food and household goods. Residents had to sign up in advance, so some were reluctantly turned away.
"We're out. We only had 800 cards and 800 boxes of groceries," a volunteer gently tells those without tickets for the day's goods. "I'm sorry, we just don't have any more."

I lost my job, the boat's broke down, I'm homeless, my wife is living with my mother-in-law, and I'm living on the boat.
- Aaron Hofer
"It's taken a toll on us. We've split up twice since this happened," Lena says. "We're just now starting to talk and get back together. Because we've lost our place to live, we have lost our vehicle, we have lost our phones."
They've lost everything but their children.
"I have a 2-year-old and a 4-year-old," says Lena. "They're both boys, and they're the love of my life."
Talking about her boys, Justin and Jordan, puts a smile on Lena's face.
"They make me happier than anybody," she says. "Whenever I'm down about everything that's going on, I just look at them and know that I'll be all right as long as they're still in my life."
The pain is raw in Aaron Hofer when he talks about his boys.
"If somebody takes my kids because I can't help myself — I just, I don't know," he says. "It's hard to think about things like that."
He and the boys climb on a play set at a public park just across the street from the Gulf where he once made his living.
Aaron worked on his uncle's shrimp boat. They had a good week when the waters reopened in the fall, but then broke a winch that hauls in the nets. Aaron says the game's over for this year. 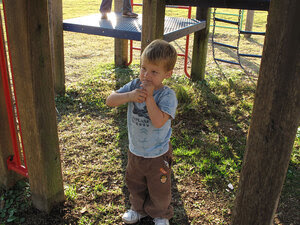 Debbie Elliott/NPR
Since the Hofers lost everything, Lena says she has noticed behavioral changes in her kids. Justin, who's 2, started biting his fingernails and holds his ears whenever he's feeling stressed.


Since the Hofers lost everything, Lena says she has noticed behavioral changes in her kids. Justin, who's 2, started biting his fingernails and holds his ears whenever he's feeling stressed.
"I lost my job, the boat's broke down," he says. "I'm homeless, my wife is living with my mother-in-law, and I'm living on the boat."
Aaron tenderly looks at his children giggling around the playground. He says they don't understand what's going on.
"They constantly ask, 'Why we got to stay with Aunt Mimmy? Why do we have to stay with G-granny? Why do we have to stay with Maw Maw? Are we going to Billy's house?' You know. 'I want to go home,' is what they want," he says.
Lena has noticed behavioral changes in her kids.
"They stress out," she says. Her 2-year-old has started biting his fingernails. "And he holds his ears whenever just the stress of life come up. Because he don't even want to hear it, you know, and he's 2. He understands too much."
Children are little sponges — they pick up on everything that happens to their parents, says Shelley Foreman, coordinator of children's services at the Gulf Coast Mental Health Center in Gulfport, Miss.
She says more than one-third of the 80 families they treat report oil-spill related trauma symptoms in their kids, such as anger, irritability or acting out at school.
"They can't use their words because they may not be able to identify what they're feeling, so the only way they know how to tell is by their behaviors," Foreman says. She says the spill has had a spiraling, trickle-down effect that disrupts the functioning of families.

'He's Taking This Harder Than He Took Iraq'
Aaron Hofer is an Iraq war veteran. He's in constant motion as he speaks — cracking his knuckles, munching on peanuts or smoking a cigarette. His wife says she hardly recognizes the "dog-faced soldier" who never used to let anything get him down.
"He's taking this harder than he took Iraq — and he was at death's door every day over there," she says. "And because of him not being able to make it up out of this rut, it's just taking him down further and further. We have problems. We fight." 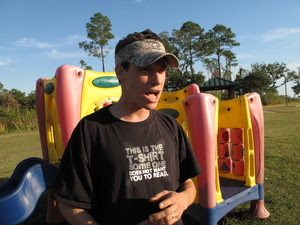 Debbie Elliott/NPR Aaron Hofer, 27, is an Iraq war veteran and fourth-generation shrimper who lost the lucrative summer season to the BP oil spill. His wife, Lena, says she thinks he's struggling more now than he did in Iraq.