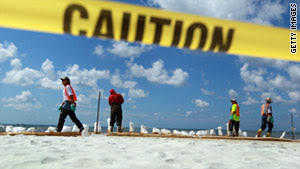 The ban on drilling in the Gulf is a result of the
April 20 explosion of BP's Deepwater Horizon drilling rig.
Washington (CNN) -- President Barack Obama will not be allowing new drilling in the eastern Gulf of Mexico for at least seven years, Interior Secretary Ken Salazar announced Wednesday.
The exploration of drilling possibilities in sensitive areas of the Arctic will proceed "with utmost caution," he said.
Obama's decision effectively reverses White House plans announced at the end of March to open the Gulf region -- along with other large swaths of U.S. coastal waters -- to oil and natural gas drilling.
Under the plan, roughly two-thirds of available oil and gas resources in the eastern Gulf would have been opened to drilling. Areas located within 125 miles of the Florida coast would have remained off limits.

Salazar said the seven-year ban is being imposed as a result of lessons learned from the April 20 explosion of BP's Deepwater Horizon drilling rig in the Gulf, which killed 11 people and triggered one of the worst environmental disasters in U.S. history.
An estimated 4.9 million barrels (206 million gallons) of oil gushed into the Gulf before the broken well, 5,000 feet below the surface, was capped.
There is a broader recognition of the need for a more "robust safety regime" and additional environmental analysis in the Gulf, Salazar told reporters.
He dismissed concerns that the decision will seriously damage efforts to further develop domestic energy resources, noting that roughly 29 million acres already under leases in the Gulf have not yet been developed.
Rep. Ed Markey, one of the most vocal BP critics in Congress, said the announcement shows the White House "has heeded the lessons of the BP disaster."
"This plan will move America forward on a prudent path until we can ensure that when an oil company drills ultra-deep, it is ultra-safe," the Massachusetts Democrat said. "Opening up wide swaths of our coasts to oil drilling before we put the proper regulatory measures in place would have been a mistake."
Sen. Bill Nelson, D-Florida, said it is "good the president is listening to the people of Florida."
The administration lifted a six-month moratorium on deep-water oil drilling in October.
Salazar has argued that the moratorium provided time to make sure accidents similar to the BP disaster won't occur again, and that rig operators are prepared to deal with worst-case scenarios if they happen.
Critics of the ban, including Republican leaders, Gulf state officials and Gulf Coast residents, said it only hurt oil and gas workers in hard-hit coastal communities, where hundreds of jobs were lost because of the disaster.
Lousiana Gov. Bobby Jindal, a Republican and a frequent critic of the Obama administration's handling of the Gulf spill, said in a statement, "This announcement from the Obama administration today will undoubtedly send more economic capital and even more jobs overseas, in the wake of those oil rigs that already left our waters for Egypt, the Congo and Nigeria during the 'arbitrary and capricious' moratorium on deepwater drilling."

Environmental groups and other supporters of the moratorium argued that it was necessary due to a lack of effective regulation of deep-water drilling that allowed the Deepwater Horizon explosion and subsequent spill to occur.
Posted by John L. Wathen at 8:13 AM