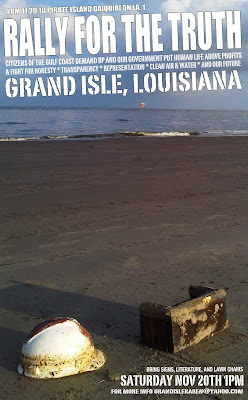 Grand Isle, Louisiana - The Gulf of Mexico is still under assault by legions of oil on a daily basis. Although BP and federal officials have all but declared the disaster over, local citizens, politicians, environmental and industry groups understand the effects of the April 20 spill are still in the early stages.

A growing number of coastal citizens are now ill from the effects of the dispersants and oil, the validity of the FDA’s safe seafood claim has been disputed in a number of independent tests, the ecosystem is suffering exponentially, the offshore drilling moratorium - although lifted, is still in effect due to the lack of issuance of new permits, and sub-sea and surface oil and dispersant continues to come ashore daily affecting humans, wildlife and domestic animals.

This rally will center around sharing of information by those who live, work and play at ground zero for the spill, and their unique experiences.

Independent test results, interviews and all relevant information will be available to the press.

All local and state politicians; as well as, the EPA, FDA, NOAA, Coast Guard, DEQ and other involved entities have been invited to attend.

Donations will be taken to send a delegation to speak to congressional leaders in Washington D.C.

Food in the form of Bar-B-Cue and Shrimp will be available free of charge.

“The objective of the event is to meet with Gulf Coast Residents and present our case, regarding the health of our people, the impact on our communities, etc. We want to compile a "history" of our feelings, experiences, beliefs, whatever they may be, since the oil spill. It is not a "bash BP and/or the govt. event", it is a RALLY FOR THE PEOPLE TO BE ABLE TO TELL THEIR TRUTHS.” - Event Organizer, Karen Hopkins

The event is scheduled for 11/20/10 and  will begin at 1:00 p.m. on the property of  Pirate Island Daquiri Shop  on La. 1 in Grand Isle, several hundred people are expected to be in attendance.