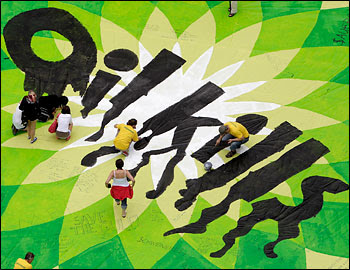 BP oil spill cleanup and containment
BP, the government and an army of volunteers are fighting to contain and clean the millions of gallons of oil spewing from the site of the Deepwater Horizon explosion in the Gulf of Mexico.
» LAUNCH PHOTO GALLERY

By Steven Mufson
Washington Post Staff Writer
Monday, November 22, 2010; 7:16 PM
Kenneth R. Feinberg is in charge of handing out $20 billion of BP's money, but he's finding that it isn't easy.

This Story
View All Items in This Story
View Only Top Items in This Story
Tuesday is the day that Feinberg wants to end emergency payments by BP's Gulf Coast Claims Facility to individuals and businesses for damage inflicted by the massive oil spill in the Gulf of Mexico. After Thanksgiving, Feinberg will start offering lump-sum payments to people ready to settle all present and future claims - giving up their rights to file lawsuits.
But not everyone is buying into his plan.
Last Friday, a senior Justice Department official sent a letter to Feinberg warning of "concerns" over the pace of the claims process, the "overbroad" release forms for settlements, and the need for "additional transparency." The letter said "the success of the GCCF must be judged by whether the people of the Gulf feel fairly treated."
Earlier this month, Alabama Gov. Bob Riley (R) called Feinberg's claims process "extortion," and outgoing Alabama Attorney General Troy King issued a "consumer alert" warning people that Feinberg "works for BP." Feinberg was named by President Obama, though BP is paying him and four other lawyers at his firm $850,000 a month to run the fund.
Plaintiffs attorneys are also wary.
"It seems silly at this point, when we don't know what the long-term environmental effects are going to be," said one lawyer who said he didn't want to comment publicly until he has seen details of Feinberg's offers. "Why are they essentially . . . coming just before Christmas and flashing some money in front of people's eyes and trying to get them to waive their rights? That's not the optimal situation."
As of Nov. 18, the BP claims fund made $1.88 billion of emergency payments to 86,728 individuals and 31,271 businesses. Feinberg and his team have rejected 56,197 claims. Feinberg received a total of 400,516 of damage claims, but only 8,055 of them were for final settlements.
As a result, Feinberg has agreed to make "interim" payments , which will be reviewed every three months instead of every six months. Now gulf coast residents and businesses face this dilemma: If they want to hang on to their rights to sue BP and other companies, they can keep getting payments from Feinberg's fund that will be reviewed, and possibly terminated. If they are ready to take lump sums for all present and future damages, they have to sign away their right to sue the London-based oil giant later.
"If I were a private lawyer, I would recommend that my clients take the money now," Feinberg said recently. He said "finality is a virtue." Moreover, with fisheries and coastlines reopening for business, in a year or two damages might appear smaller than they do today.
If the emergency payment program is any indication, coming up with final settlements won't be easy.
Feinberg has made a career out of running big funds, such as the one for victims of the Sept. 11, 2001, terrorist attacks. He has relied on legal techniques to calculate payments designed to shortcut lengthy litigation. The Exxon Valdez case is the poster child of what can happen otherwise: it dragged on for 20 years, a big settlement was slashed on appeal, final payments were modest and many plaintiffs died before receiving anything.
Although $20 billion might seem like enough to go around, Feinberg wants proof of damages, and that proof isn't clear-cut. A chiropractor says business is slow because there aren't as many people fishing. The Plaquemines Parish government is providing forms on which people write their names and a dollar figure with no backup documents; they declare that they deserve money "due to the hardship caused by the oil spill." Claims have also come from beer distributors and dentists.
Florida restaurant and lodging businesses say they suffered because tourists were frightened off by predictions - incorrect as it turned out - that oil would reach their shores. Feinberg has been battling plaintiffs' lawyers over the question of "proximity," meaning how close to soiled coastlines is close enough for payments.
Feinberg and his team - he has 3,000 people reviewing claims - have also unearthed 1,200 cases of alleged fraud. For a fee, a ring of more than a dozen boat owners and a tax preparer allegedly drew up and distributed fake documents to people who falsely claimed to be deckhands. One woman allegedly stole the identity of her dead sister so she could file a claim. Several individuals fabricated documents showing they owned gift shops that didn't exist. A person who was already in prison during the oil spill filed a claim for lost earnings.
Lawyer Mike Papantino, in a September interview, said that the escrow fund should have been bigger. But when asked whether he'd rather take $20 billion now versus litigating for a decade for $60 billion, he said he would rather take the money now.
"I want things to recover here. I'd love to see it work for $20 billion," he said.