Ben Raines, Press-Register
(Photo courtesy Nederlandse Aardolie Maatschappij)
This platform in the North Sea was outfitted with new green-hued lights believed to be less attractive to migrating birds. In the Gulf of Mexico and other oil fields around the world, huge flocks of birds have been documented flying in circles around oil platforms at night, often until they die of exhaustion. Scientists believe the birds become disoriented by the brightly lit platforms. Based on the experiment at this platform, Dutch researchers suggested a switch to green lighting in the North Sea would reduce the number of birds affected by lights from 6 million per year to fewer than 600,000. While the plight of a few thousand oil-coated birds received much attention during the BP spill, scientists believe that the mere presence of 4,000 oil platforms in the Gulf of Mexico may take a much larger toll on the bird population every single year. 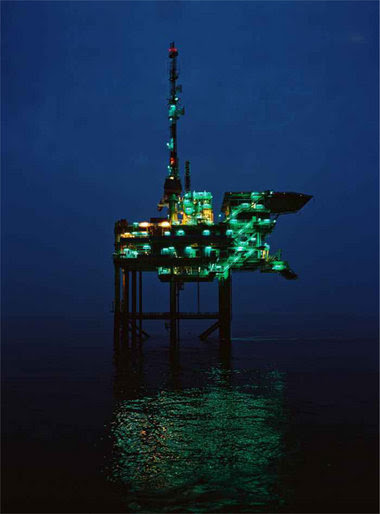 View full size
A 2005 federal study found that birds migrating across the Gulf at night can become disoriented by the brightly lighted oil platforms and fly around them in circles for hours at a time, often until they become exhausted and fall into the sea and die.
That study called for further investigation into the newly discovered “nocturnal circulation” phenomenon, but federal officials never followed up, according to a statement that the Bureau of Ocean Energy Management e-mailed to the Press-Register.
The agency — formerly known as the U.S. Minerals Management Service — did not provide an answer when asked last week why the call for further study was ignored.
Meanwhile, Dutch researchers working on platforms in the North Sea believe that simply switching to a new kind of light bulb could nearly eliminate the problem.
Two Dutch oil companies teamed up with Royal Philips Electronics to create a new green-hued light that doesn’t seem to attract birds. Employed on a platform off Holland in 2007, the green light appeared to work so successfully that Dutch scientists suggested it could reduce the number of birds that circle platforms in the North Sea by 90 percent, from 6 million a year to less than 600,000.
“That’s terrific. What a nice simple solution,” said Van Remsen, a Louisiana State University researcher who participated in the 2005 study by MMS, “Interactions Between Migrating Birds and Offshore Oil and Gas Platforms in the Northern Gulf of Mexico.”
Remsen said he hadn’t heard of the green light solution before last week, but believed that the circling problem in the Gulf could be more significant than in the North Sea, where researchers have documented up to 100,000 birds flying around a single platform.
The difficulty in estimating the actual toll on bird populations moving through the Gulf, he said, is that most of the victims fell into the sea and were eaten by fish, so there were no carcasses to count.
He said that estimates of flocks of 100,000 or more birds circling platforms sounded plausible for the Gulf based on observations during the federal study. All manner of birds — including hummingbirds, warblers, herons, cuckoos, doves, egrets, falcons, orioles, sandpipers, osprey and dozens of other woodland and shore birds — cross the Gulf.
The circling occurs primarily on cloudy nights, when the stars are obscured, Remsen said.
“Even if a bird that spent the night flying in circles around a platform heads back on its way in the morning when the sun comes up, it very likely won’t have enough gas left to make it all the way to shore,” Remsen said. “If this problem can be solved simply by changing the lights, I’d say we could save tens of thousands of birds a year, perhaps many, many, more birds.”
Remsen said he expected that it would be difficult to get federal officials to require the use of bird-friendly lighting systems. A more likely path, he said, would be for oil companies to embrace the technology voluntarily.
Representatives of Royal Dutch Shell, which participated in the Dutch research, did not respond to requests for comment about the green light experiment.
When the MMS released its 330-page study in 2005, it also issued a release titled “Oil and Gas Platforms Provide Haven for Migrating Birds.” The release made no mention of the circling behavior, although it was listed in the full study as one of three “primary” impacts that platforms have on migratory birds.
Stan Senner, head of conservation science for the Ocean Conservancy and former executive director of the Audubon Society’s Alaska office, said federal officials had clearly dropped the ball. He said that numerous studies document the millions of birds that die each year after colliding with towers or buildings on land.
“I am appalled that MMS got that report and highlighted that birds land on the platforms and didn’t talk about them colliding with platforms or flying around them in circles until they die,” Senner said.
“Certainly there were impacts on birds from the spill. Maybe getting the right kind of lighting on the platforms can be one of the ways we help counter those impacts.”
Senner also noted that federal officials just released an announcement promoting a $1.5 million study along the Atlantic Coast aimed at determining possible impacts on birds there from wind farms.
“Why are they studying possible future impacts on the Atlantic Coast and ignoring an obvious problem in the Gulf?” Senner said.
The Gulf study in 2005 found that “Once they get inside the cone of light surrounding the platform, they are either reluctant to leave or have a difficult time getting out, seemingly becoming trapped by the surrounding wall of darkness.”
The authors of the study wrote that they were ill-equipped to analyze the circling phenomenon, and that 75 species had been identified while circling platforms.
“If it’s a relatively easy fix to change the lighting on offshore structures, I’d like to know why MMS hasn’t taken any action,” said John Amos, head of SkyTruth, which monitors environmental problems using satellite imagery.
“Once again we find ourselves trailing other nations in ensuring that our offshore operations provide economic benefits while being safe for people and safe for the environment. We can do better. We should do better.”

Migrating Brown and White Pelicans in flight over South Louisiana. 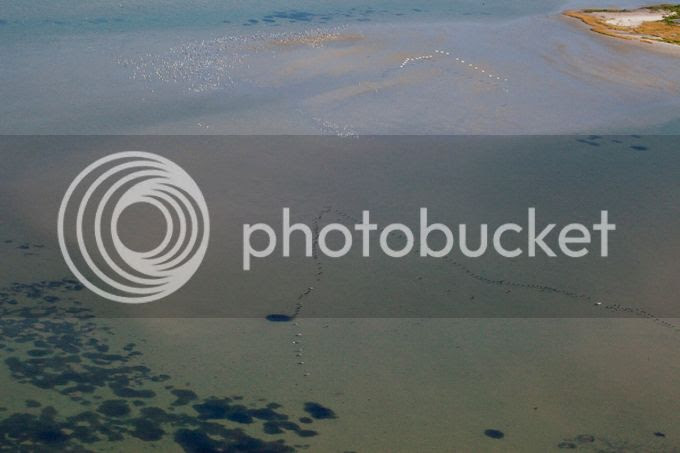