June 10 (Bloomberg) -- Early this week, I toured the marshlands near Louisiana’s Barataria Bay, a precious ecosystem that provides breeding grounds for area marine life.
The worst oil spill in U.S. history has shut down most fishing around here and canceled the shrimp season. Now it’s threatening that ecosystem.
So instead of hauling nets, local shrimpers, crabbers and fishermen are out on Barataria Bay in the temporary employ of BP Plc subcontractor DRC Emergency Services. They’re laying oil- absorbing boom lines to keep the black mess away from the marshlands.
“The marshes two miles south of where we’re at are the actual nurseries where the spawning happens for the shrimp, crab, pogies, snails -- it’s a whole food chain,” says Raymond Griffin, owner of Griffin Fishing Lodge.
Griffin reckons he lost $40,000 in June in canceled fishing trips. He’s making up some of the losses by hiring out boats to the subcontractor, whose personnel are also filling his lodge. He’d much prefer that they were fishermen.
Mike Roberts is among the newly unemployed, his 34-foot shrimp boat idle at the dock. On the day I visited, he got a call from the subcontractor, who will hire his boat for $1,500 a day, probably to haul supplies between here and Grand Isle, 38 miles south, where thick crude has already hit the shorelines.
“I am just so angry,” says Roberts’s partner, Tracy Kuhns of Louisiana Bayoukeeper, an affiliate of the international Waterkeeper Alliance that works to protect waterways. “The only choice these guys have is go work on that spill and risk their health -- or not be able to pay their bills.” Kuhns is concerned about the men handling oil and breathing fumes and smoke from burn-offs.
Delivering Meals
My marshlands tour started when I joined a crew delivering meals to the shrimpers laying boom lines. We took a boat to the back of Boutte’s Bayou Restaurant in Lafitte, loaded 180 dinners of spaghetti and fish, then chugged south, toward Hackberry Bay.
It’s hard to believe that nature has coexisted with oil and gas production for so many decades here. Oak and cypress trees laced with Spanish moss line the shores. In one of them a bald eagle has found purchase. White egrets feed in the shallows while nasty green flies feed on us.
We delivered the meals to several drop-off points around the bays, where shrimp boats are stacked with absorbent booms. Miles of the stuff has been laid on the water in recent days, with a plan to collect and dispose of it eventually, probably by incineration.
“You never know what the end result is going to be really, but so far BP has done everything they said they would do,” Griffin says.
BP’s $5,000
The company has been paying out $5,000 to those who can show their livelihood has been disrupted by the spill, and it promises to compensate businesses like Griffin’s for future losses.
At the same time, BP Chief Executive Officer Tony Hayward has drawn fire for his verbal gaffes, including: “There’s no one who wants this thing over more than I do, you know. I’d like my life back.” That did not go over well with local fishermen, whose lives have been turned upside down.
“I’m in total confusion,” says John Hickman, a shrimp man who quit school in the sixth grade to follow generational footsteps into the trade. “I have no way of knowing where my life is going.”
Hickman, 49, is the father of three and grandfather of ten. He has put $70,000 into his 32-foot boat, and pays $430 a month on its note and $3,000 a year in insurance, among other expenses. “I don’t know whether to pay off the boat,” he says.
Charities’ $100
He and others around Barataria must survive on the scant relief found in $100 food vouchers distributed by Catholic Charities, the recent recipient of $1 million from BP. Anxiety and dread is everywhere.
“It’s going to be bad, but how bad?” he wonders.
The people of Barataria have survived some hellacious storms in recent years, but everyone I speak with agrees that this new disaster is a different order of crisis.
“Everybody comes together in the community to help each other,” says Kuhns, recalling the onslaughts of Katrina, Ike and other killer storms. “You live with it; you rebuild. But this is something we have no control over, and we may not be able to repair it -- not in our lifetimes, anyway.”
(Mike Di Paola writes on preservation and the environment for Muse, the arts and culture section of Bloomberg News. The opinions expressed are his own.)
To contact the writer of this column: Mike Di Paola at mdipaola@nyc.rr.com.
Last Updated: June 10, 2010 00:01 EDT 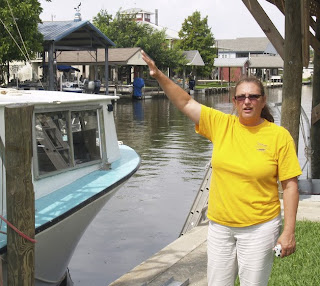 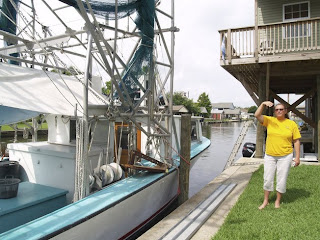 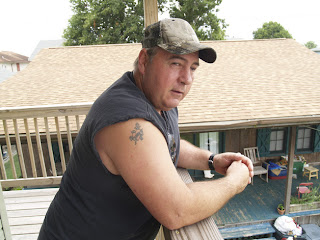 Out-of-work shrimp fisherman John Hickman has time to talk with shrimp season canceled in Barataria, LA. "I have no way of knowing where my life is going," laments Hickman. Photographer: Mike Di Paola/Bloomber. 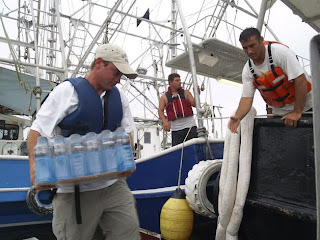 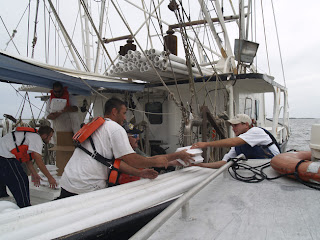 Food is delivered to fishermen around Barataria Bay in Louisiana. The crews are not fishing but laying out absorbent boom lines to capture spilled oil. Photographer: Mike Di Paola/Bloomberg. 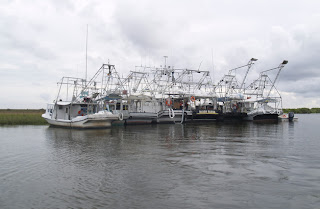