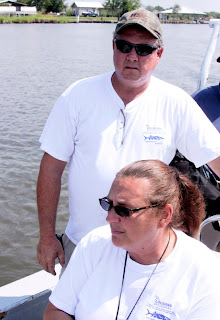 All hell is breaking lose!  My boat was on the spill clean up, along with many others from our community. Mike had Billie running the boat.

Oil filled Bay Jimmy on 6/6/2010.  The guys said it was 3 ft deep in places. They were trying to lay boom to contain it.  All that night, the guys said they could hear helicopters flying all over.  They couldn't see them, but heard them flying over.  The next morning all the oil had magically disappeared.

On 6/7/2010 we received calls from men telling us about it. Then we started getting calls from folks in our town saying to come check out the water in the canals behind our homes.  There were clouds of dispersed oil about 1ft below the surface in all of the canals off of the main bayou.  When we grabbed a bucket full and ran a paper towel through it, the paper towel came up covered in little orange/red dots of what we believe is oil.  The following morning

6/8/2010 we found oil floating on the surface (looked kind of like floating snot globs) ranging in size from quarter size to around 5 in around.  We ran a white paper towel through the water and it came up looking, feeling and smelling like oil.  The air in our community smells of oil and some sickly smell.  My grandbabies were swimming in the canal on Sat.  I am praying it was in here yet.

6/8/2010, Billie called and said he was bringing in our deckhand because he was sick.  Bad muscle cramps etc.

6/9/2010:  Fishermen were describing helicopters spraying something, at night, from helicopters that reminded them of being in Vietnam, when they were spraying agent orange.  The same type of system!  Everyone is getting really angry about the spraying of dispersants.  They are going to kill our estuary and most likely us!  This has to stop.