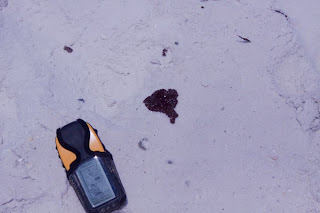 ORANGE BEACH (AP) — Beaches were virtually oil-free until Wednesday in Orange Beach. But dawn brought lines of small, rust-colored tar balls stretching as far as the eye could see along the water line.

Related Links:
Walking on the beach with her husband, Cheryl Trotter wondered if sealife knew the oil was coming somehow.
"I've seen dolphins everyday, at least four, on my morning walks. Today, there are none," said Trotter, of Knoxville, Tenn. She rubbed sand on her feet trying to remove oil as she spoke.
Jim Trotter said their children wouldn't get in the Gulf, even though waters at Orange Beach had been clear. "It's been beautiful until now," he said. "This is going to be a shock."
Tricia Washington of Tupelo, Miss., stood at water's edge and watched small tar balls roll in. The small globs looked like a solid, reddish-brown streak in just a few minutes.
Washington is with her daughter, granddaughter, two nieces and one of their friends. Her husband, a farmer, had to stay home and work.
"It wasn't bad yesterday, but we still stayed at the pool. There's a lot more today," she said. "We came down Monday and are leaving tomorrow. I guess we hit it right."
In the distance, a big rig just off the beach was laying boom near the entrance to Perdido Bay, where strands of orange and yellow boom protect inlets, small islands and grassy areas.
Posted by John L. Wathen at 1:03 PM