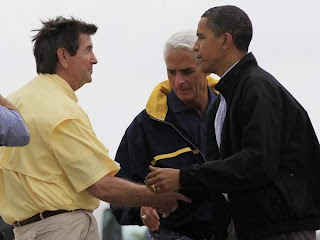 
President Barack Obama is greeted by Alabama Gov. Bob Riley, left, as Florida Gov. Charlie Crist looks on in Kenner, La., on Friday. Riley said he will close Alabama beaches if the oil is deemed a health threat. Local officials are urging beachgoers to stay out of the water.
By Melissa Nelson and Holbrook Mohr The Associated Press
Published: Saturday, June 5, 2010 at 3:30 a.m.
Last Modified: Friday, June 4, 2010 at 11:01 p.m.


PENSACOLA BEACH, Fla. | The smell of oil hangs heavy in the sea air. Children with plastic shovels scoop up clumps of goo in the waves. Beachcombers collect tarballs as if they were seashells.

The BP catastrophe arrived with the tide on the Florida Panhandle’s white sands Friday as the company worked to adjust a cap over the gusher in a desperate and untested bid to arrest what is already the biggest oil spill in U.S. history. The widening scope of the slow-motion disaster deepened the anger and despair just as President Barack Obama arrived for his third visit to the stricken Gulf Coast.

The oil has reached the shores of four Gulf states — Louisiana, Mississippi, Alabama and Florida — turning its marshlands into death zones for wildlife and staining its beaches rust and crimson in an affliction that some said brought to mind the plagues and punishments of the Bible.

“In Revelations it says the water will turn to blood,” said P.J. Hahn, director of coastal zone management for Louisiana’s Plaquemines Parish. “That’s what it looks like out here — like the Gulf is bleeding. This is going to choke the life out of everything.”

Six weeks after the April 20 oil rig explosion that killed 11 workers, the well has leaked somewhere between 22 million and 47 million gallons of oil, according to government estimates.

A device resembling an upside-down funnel was lowered over the blown-out well a mile beneath the sea late Thursday to try to capture most of the oil and direct it to a ship on the surface. But crude continued to escape into the Gulf through vents designed to prevent ice crystals from clogging the cap. Engineers hoped to close several vents throughout the day.

“Progress is being made, but we need to caution against overoptimism,” said Coast Guard Adm. Thad Allen, the government’s point man for the crisis. Early in the day, he guessed that the cap was collecting 42,000 gallons a day — less than one-tenth of the amount leaking from the well. Since it was installed, it had collected about 76,000 gallons, BP said in a tweet Friday night.

Similarly, later in the day, in a visit to Louisiana, Obama said it was “way too early to be optimistic” about the latest attempt to stanch the spill.

One unanswered question was whether the cap fit snugly. BP sheared off the well pipe before installing the cap but was unable to make a smooth cut.

As the operation went on at the bottom of the Gulf of Mexico, the effect of the BP spill was increasingly evident.

Swimmers at Pensacola Beach rushed out of the water after wading into the mess, while other beachgoers inspected the clumps with fascination, some taking pictures. Children were seen playing with the globs as if they were Play-Doh.

David Lucas of Jonesville, La., and a group of friends abruptly cut their visit short after wading into oily water. “It was sticky brown globs out there,” Lucas said after he and the others cleaned their feet and left.

Health officials said that people should stay away from the mess but that swallowing a little oil-tainted water or getting slimed by a tarball is no reason for alarm.

Steven Majerus and his 11-year-old nephew walked along Pensacola Beach and checked out the oil clumps as family members splashed in the surf. Majerus filled a plastic bag with tar and photographed it with his phone. “It’s really hot. See how hot it gets in this bag with the sun beating down on it?” he said.

Randy Ivie, a charter boat captain, broke down in tears as he tried to explain how sad he was to think that his grandchildren might not see the same white beach and turquoise waters he enjoyed.

At Grand Isle, La., whose population usually welcomes 20,000 beachgoers during the summer months, pelicans coated in chocolate syrup-like oil flailed in the surf.

At Gulf Shores, Ala., Wendi Butler spotted clumps of tar in the surf and was repelled by the heavy odor of oil.

“It smells like a flight line. I know, my ex-husband was in the Air Force. He would come home from work every day smelling like this,” said Butler, of Perdido Bay, Fla. “You don’t smell the beach breeze at all.”

On Grand Isle, where homes bear quirky names like “Shore Thing” and “The Sand Bar,” residents hung new signs before Obama’s visit. “Tony Bologna,” read one, a dig at BP CEO Tony Hayward. On another home, named “Mama-Pappy Dream,” a new sign was added: “Dream is Gone.” Still another said, “End this nightmare.”

“He ain’t much of a leader,” Eugene Ryman Jr. said of Obama. “The beach you can clean up. The marsh you can’t. Where’s the leadership? I want to hear what’s being done. We’re going to lose everything.”

When he arrived in Louisiana, Obama indicated he felt the frustration locally and from the rest of the country.

“This has been a disaster for this region, and people are understandably frightened and concerned about what the next few months and the next few years may hold,” Obama said after a briefing with the Coast Guard’s Allen and the governors of Louisiana, Florida and Alabama.

On his trip to the Grand Isle on the coast, his motorcade passed a building that had been adorned with his portrait reminiscent of posters of him during his presidential campaign. Instead of “hope” or “change,” the words “what now?” were on his forehead.

Once there, Obama rolled up his sleeves and sat down at a table with the fishing industry workers, and they all ate shrimp and corn on the cob. One by one, they told Obama their horror stories, which he then related to reporters.

“Terry’s been shrimping out here for 45 years. Right now things are completely shut out,” the president said. “Floyd has oil seeping into these oyster beds.”

The mayor of Grand Isle, David Camardelle, choked up as he told of staying up nights worrying, “looking at the ceiling fan.”

Meanwhile, BP’s Hayward assured investors that the company has “considerable firepower” to cope with the severe costs. Hayward and other senior BP executives struck a penitent note in their first comprehensive update to shareholders since the oil rig explosion.

“We will meet our obligations both as a responsible company and also as a necessary step to rebuilding trust in BP as a long-term member of the business communities in the U.S. and around the world,” said BP chairman Carl-Henric Svanberg. “This is in the interest of all our stakeholders.”
Posted by John L. Wathen at 8:02 AM