The pressure is mounting on BP to address worker safety issues.
It was reported today that an official with the Department of Labor authored an internal memo earlier this week citing “significant deficiencies” in BP’s handling of the health issues facing cleanup workers. 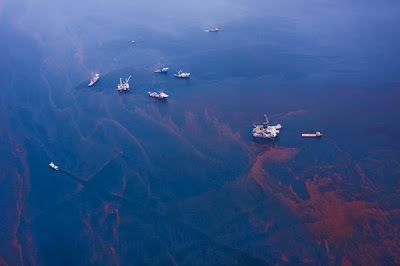 Last week, as several workers were hospitalized and the Coast Guard recalled all 125 commercial fisherman boats being used for cleanup, NRDC and 38 other community-based groups from the Gulf coast region sent a letter to OSHA and other federal agencies requesting immediate action to enforce OSHA standards that are supposed to protect workers, including a requirement to wear respirators. OSHA is a federal agency tasked with enforcing worker safety and health laws at the workplace.
On CNN, BP’s CEO Tony Hayward responded to the worker health crisis by saying:  “I’m sure they were genuinely ill, but whether it was anything to do with dispersants and oil, whether it was food poisoning or some other reason for them being ill. You know, food poisoning is clearly a big issue when you have a concentration of this number of people in temporary camps, temporary accommodation, it’s something we have to be very, very mindful of.  It’s one of the big issues of keeping the army operating. You know, armies march on their stomachs.”
He can’t be serious.  This is either BP putting its head in the sand regarding health threats to workers or a more insidious pattern of worker safety neglect.
It turns out that BP has one of the worst worker safety records in the country.
On October 30, 2009, OSHA issued a record-breaking fine to BP by issuing $87,430,000 in proposed penalties for the “company’s failure to correct potential hazards faced by employees.”  Moreover, OSHA cited BP with 439 willful violations for failures to follow industry-accepted safety measures.  A willful violation is a violation where an “employer has knowledge of a violation and demonstrates either an intentional disregard for the requirements of the Occupational Safety and Health Act of 1970, or shows plain indifference to employee safety and health.”
The penalties were levied against BP’s Texas City Refinery, which is the third largest petroleum refinery in the United States with a capacity of 475,000 barrels of crude per day and over 1,200 employees.  On March 23, 2005 an explosion and fire occurred at the facility and resulted in the death of 15 contractor employees and injury of 170 other BP employees and contractors.  The safety violations that led to the explosion were so egregious, that the U.S. Chemical Safety and Hazard Investigation Board concluded the disaster was “caused by organizational and safety deficiencies at all levels of the BP corporation.”
Other BP worker safety facts:
So who do you believe now? What BP says or its real safety record?
It’s time for the Department of Labor and OSHA to step up once again and hold BP accountable by enforcing worker safety requirements.

*In an ironic twist, last year the Minerals Management Service (MMS) awarded BP and Transocean, the owner of the Deepwater Horizon rig, Safety Awards for Excellence.  MMS bestows these on offshore oil and gas corporations for “outstanding safety and pollution prevention performance.”  The Huffington Post features a bizarre rap video where Transocean touts its outstanding safety record at the Deepwater Horizon rig.  I think I feel sick.

ShareThis(bookmark or email this entry)
Posted by John L. Wathen at 10:23 AM