By Cherie Ward - The Mississippi Press 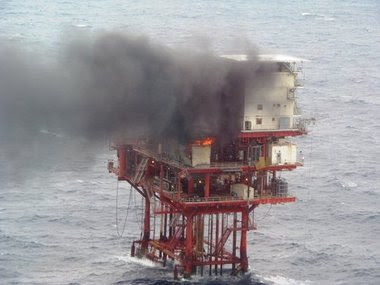 View full sizeA fire burns on board the GI 102A oil production platform 50 miles south of Grand Isle, Louisiana on March 6, 2011. The Coast Guard responded with multiple sea and air assets to the reports of the fire, rescuing 2 individuals who were on board the platform at the time. (U.S. Coast Guard Photo)
PASCAGOULA, Mississippi -- An official with the U.S. Coast Guard confirmed that a fire broke out Sunday morning on an oil rig 50 miles off Grand Isle in the Gulf of Mexico, injuring 2 people but apparently not causing a leak of crude into the water. Petty Officer Steve Lehmann said 2 people were sent into the water at about 11 a.m. when the GI 102A oil production platform owned by Arena off Port Fourchon, La. caught fire.
The 2 men used a life capsule to escape the blaze and were rescued by a nearby fishing vessel and taken to West Jefferson in Marrero, he said
Lehmann said officials do not believe an explosion was involved in the incident.
Lehmann said the rig is near the area where a oil rig leased by BP exploded on April 20, killing 11 people and causing leak that continued through the summer, creating a record oil spill in the Gulf of Mexico.
"We believe at this point that it was not an explosion and only a fire," Lehmann said, regarding Sunday's incident. "We believe those injured are OK."
Lehmann says the fire was out shortly after noon Sunday.
Coast Guard officials were responding Sunday afternoon to verify there was not an explosion, Lehmann said.
"We're still determining if there is any oil leakage," Lehmann said. "When you're putting out a fire, there's a lot of runoff. It's something we're still trying to determine, but early reports are coming back that there is not oil leakage."
Lehmann said there was a 1,000-yard secured area around the platform, and there was a temporary flight restriction 5,000 feet from the platform Sunday afternoon.
Posted by John L. Wathen at 7:55 PM