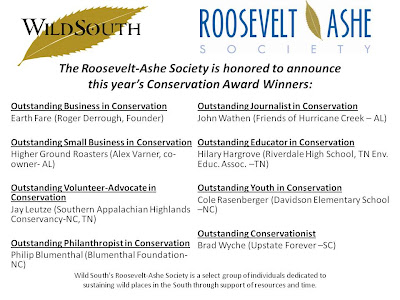 ASHEVILLE, NC –Wild South’s Roosevelt-Ashe Society announced today the winners for its annual Roosevelt-Ashe Society Conservation Awards. The awards honor outstanding conservation work in the South and recognize heroes for their contributions to protect the South’s wild places.
“These awards exist for people who believe they can move a mountain,” said Randy Talley, co- owner of The Green Sage Coffeehouse and Cafe. “The award winners are champions for all of
us to believe we can change this world, we can change our destructive behaviors, we can make a difference.”

The Roosevelt-Ashe Conservation Award Winners are:

The Award winners were selected by an independent committee made up of highly respected conservationists from across the South. Their task was difficult and unenviable due to the this year’s amazing pool of nominees. On Friday night, Wild South’s Roosevelt-Ashe Society held its annual Green Tie Gala, a “Green Oscars” event where the award winners were announced and honored.

“I’ve seen my mentors and heroes receive these awards in years past,” said Jay Leutze, Outstanding Volunteer-Advocate in Conservation award winner with the Southern Appalachian Highlands Conservancy, “and I am honored to receive recognition alongside them tonight.”

“It was fun to see our guests walk down “The Green Carpet” at this year’s Gala and have such a great time,” said Tracy Davids, Wild South’s Executive Director. “It took a village to make the Gala the smash it was and I thank all of the Asheville area businesses that contributed to it.”

Wild South is a non-profit organization whose mission is to inspire people to enjoy, value and protect the wild character and natural legacy of the South.