Posted March 28, 2011 in Curbing Pollution, Health and the Environment, Moving Beyond Oil

Share | |
As a resident of coastal Mississippi for more than 30 years, Shirley Tillman is used to seeing a few drum fish, sea gulls or jelly fish wash up on nearby sandy shores. It’s a fact of life living by the sea. But in the past few weeks Shirley has come across something she’s never seen before; dead sea turtles washing up on beaches near spring break vacationers.
They are part of a growing number of dead fish, animals and birds she and other Mississippi residents have photographed washing in with the tides in recent weeks. For Shirley, a trip to the beach no longer provides the same relaxing refuge as before.
“It’s very upsetting,” says Shirley, a grandmother and wife of a Pass Christian home builder. “I have never found anything like this until after the oil spill. It used to be if you found a dead dolphin or turtle it was front page news around here. Now it’s no big deal.” 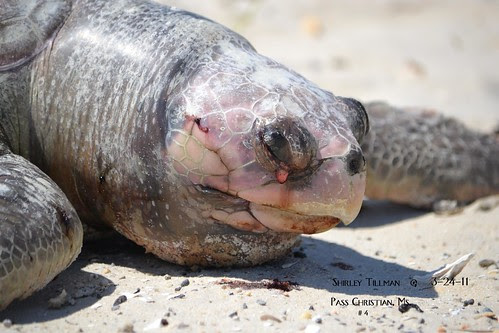 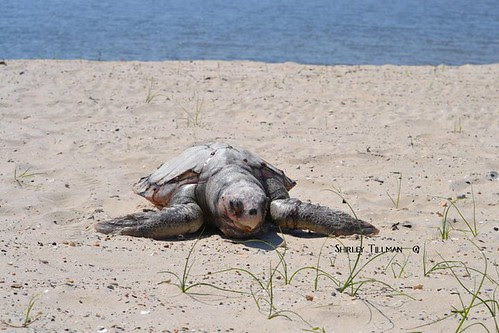 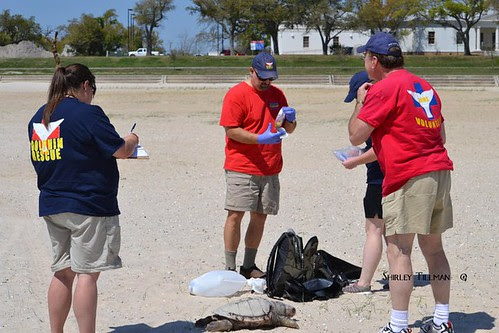 Dead turtle found March 25, near Pass Christian MS         photos by Shirley Tillman
Gulfport's Institute for Marine Mammal Studies reports it has collected 38 dead or stranded turtles in Mississippi this year, most in the past few weeks. As is the case with dolphin strandings this year, turtle tissue samples are turned over to the The National Marine Fisheries Service (NMFS), which does necropsies and further testing.
NMFS is investigating the deaths of these turtles and has increased surveillance, according to Blair Mase-Guthrie, a southeast regional stranding coordinator. “We are treating this very seriously,” she said. Possible causes could range from infectious disease, sudden shifts in water temperature, biotoxins such as red tide or the impact from the BP oil that polluted the area. "We're not ruling out any factor."
An NMFS spokeswoman in Washington confirmed agency experts are reviewing the data, but cautioned that turtle strandings tend to happen in the spring. NMFS  records show there have been 13 turtle strandings in Mississippi so far this year, a number that will rise as databases are updated.
Even 13 dead turtles is an unusually high number in March. In the past three years, NMFS reports no turtles were stranded in Mississippi until the beginning of April. The only other Gulf state to report a rise in on-shore turtle deaths this year is Texas with 48, more than twice the number counted in 2009--the year before the BP oil blowout. That year, the total number of on-shore turtle deaths in the Gulf shot up to 248, nearly five times the number from the previous year.
All five turtle species found in the gulf are endangered or threatened, including the Kemp Ridleys and the Loggerheads often seen near shore.  Federal protection and tracking programs are in place to try to preserve habitat and learn more about the lives of some of the most fascinating and revered reptile species in the world. 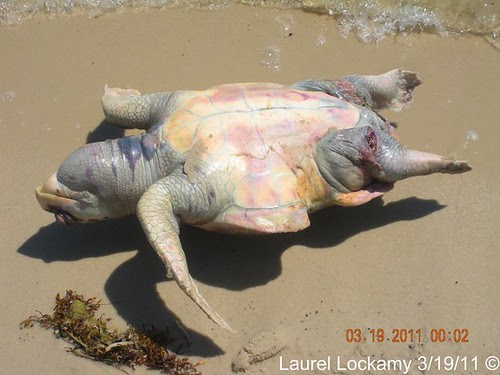 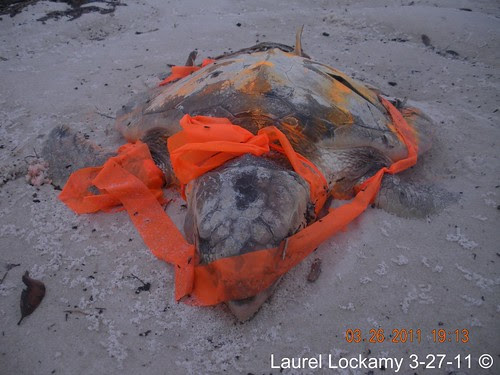 Dead turtles found recently in Long Beach, MS                    photos by Laurel Lockamy
Shirley Tillman and other residents nearby say in some cases they have been appalled by the lack of response in their communities. On Friday, Shirley found a dead sea turtle and reported it to authorities. She was told to leave it on the beach, so she called in the coordinates and dragged it off the shoreline, leaving it by a wall marked off with orange cones. She says the next day the turtle was still there, decomposing.
“I’m really mad. I’m finding dead turtles, birds, giant fish and other animals all over the beach. No one comes by to clean them up right away and people come down here and let their kids play next to them. And the water looks like chicken broth.”
"It's so sad," says Mississippi coastal resident Laurel Lockamy who found a dead sea turtle over the weekend wrapped in orange tape, ready for retrieval.
Turtles are just the latest sea life deaths to get federal attention. So far this year, at least 134 dolphins have been found stranded along the Gulf coast, about four times the average number. Nearly half of the  dolphins were newborns or juveniles. Earlier this year NOAA issued an Unusual Mortality Event for dolphins, which triggers a federal investigation into the deaths.
Recently, dolphin tissue samples from independent marine labs were  confiscated and sent to federal labs for analysis due to a federal investigation into their cause of death. NMFS is continuing to do testing on the turtles and dolphins but test results aren’t expected soon. Scientists say it may be impossible to know if dolphin and turtle strandings are due to the BP oil blowout. And some say the increased numbers of dead dolphins and turtles could be due to increased surveillance of the area after the oil washed in.
That’s not very reassuring to residents who have already lost trust in government officials and the BP claims process. Science may take a long time to solve these mysterious deaths, but people like Shirley feel they already know the answer. She and others blame ongoing health problems from exposures to oil and dispersants, something the medical establishment has yet to confirm. That's not surprising, Shirley says. "If they don't have a decent system to track and find out what's happening to dolphins and turtles, then why should they have one for people?"
Whether or not the oil had anything to do with the dead turtles washing up on the beaches, people here simply want answers. They want their lives—and their ocean—back. They want it back the way it used to be.
Posted by John L. Wathen at 10:32 AM