Author David Helvarg takes a flight from the shores of Alabama to the site of the BP Deepwater Horizon explosion. What he finds is disturbing.
Wed, Jun 30 2010 at 2:56 PM EST
Read more: GULF OIL SPILL, MARINE LIFE

TAINTED SEA: The shadow of a helicopter passes over oil from the Deepwater Horizon oil spill in waters less than 10 miles off the coast of Grand Isle, La., on June 28. (Photo: Gregory Bull/AP)
Ten years ago I flew out to a BP Deepwater platform in the Gulf of Mexico to report on offshore drilling and was amazed I could see oil rigs all the way to the horizon. Now I’m appalled that from 2,000 feet up I can see heavy oil slicks all the way to the horizon.
On Monday, June 21, I flew out of Sonny Callahan Airport in Fairhope, Ala., with pilot Tom Hutchings of SouthWing, a nonprofit group whose T-shirt logo reads “Conservation through Aviation.”
Tom is an angular biologist with an MBA who loves to fly. John Wathan, who joined us, shooting photos and video through the open luggage door, is the Hurricane Creek Keeper, a member of Bobby Kennedy Jr.’s environmental group. An ex-construction contractor, John looks more like a former Hells Angel than a tree-hugger with his full white beard and red, white and blue headscarf. 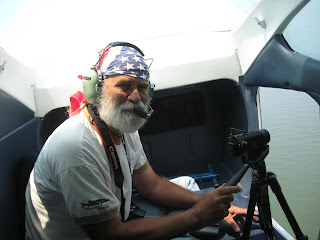 David Helvarg is an author and president of the Blue Frontier Campaign (www.bluefront.org), a marine conservation group. His latest book is "Saved by the Sea – A Love Story with Fish.’" (St. Martin’s, 2010).