By Hiring Gulf Scientists, BP May Be Buying Silence from NPR 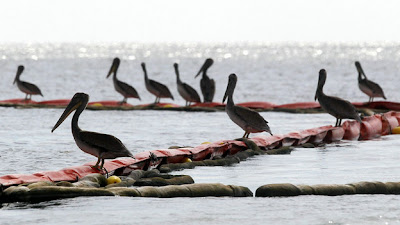 For months now, local scientists have been out on Gulf waters, advising the cleanup and measuring the damage. But there is growing concern that some of the best minds are being sidelined, since they've signed on as paid consultants to BP.

"Everybody's arming up for the big day in court," says Richard Shaw, the director of Louisiana State University's Coastal Fisheries Institute. He's one of many concerned that BP is buying up too much of the region's brainpower.

"You would think you'd want to bring all the intellectual resources to bear," he says. "It's pretty frustrating." Shaw says he has not been approached by BP, but many of his colleagues have.

University of South Alabama's Bob Shipp says BP's lawyers tried to hire his whole Department of Marine Sciences to do research for them. Under the deal, the scientists could disclose their results only if BP said so. Otherwise, they'd have to keep it secret for three years.

"They wanted the oversight authority to keep us from publishing things if, for whatever reason, they didn't want them to be published," Shipp says. "People were muzzled as part of the contract. They were muzzled, and certainly it's not something we could live with."

But professors from some universities, like LSU, Texas A&M and the University of Southern Mississippi, did accept BP offers. After a blast of public criticism, however, the Mississippi professors had a change of heart and backed out.

They declined to comment; it's touchy not just because of the academic integrity issue, but also because of public opinion.

"I am a little concerned about everyone hating me if I was working for BP," LSU wetlands scholar Andy Nyman says. He chose instead to work for a lawyer suing BP. His deal calls only for expert testimony, not research, and he's not subject to any "hush clause."

But Nyman says he can only surmise how many others are, either for BP or the government agencies that will oppose them in court.

"I'm guessing, from the volume of people who are wetland experts that you do not hear from in the press right now, that everyone but me is locked in," Nyman says.

BP declined to be interviewed for this report, but in a statement the company says its deals vary, from large, "no-strings-attached" grants to universities to "scientific experts for the purpose of litigation" who need to keep things confidential.

"It's the way things work. This happens every day, and no one should be surprised," says Mark Davis, who heads Tulane Law School's Institute on Water Resources Law and Policy. In some ways, he says, BP is doing what other oil, tobacco and pharmaceutical companies have done in the past: hiring scientists to do research they want kept secret.

But in a case like this, Davis says, the public will pay a big price if BP can constrain the free flow of scientific data.

"When the best fishery scientists actually may have evidence that would work against you, but they're not able to present it to the other side or to the public, well then, you've essentially bought some silence," he says.

"It's a cagey legal strategy, but I do think it's a problem from a public standpoint," says Robert Wiygul, an attorney who represents fishermen, businesses and environmental groups that are suing BP. He says the public interest really depends on access to a relatively small pool of specialists.

"When you talk about the red snapper fishery or black mangrove swamps, there are maybe half a dozen people who fully understand those resources," Wiygul says. "There needs to be full exchange of data so that we can all understand what happened to these public resources."

To many in academia, an underlying problem is the lack of other options for research. Shaw says universities have cut back and federal grant money has all but dried up.

"There is a bunch of frustration," he says. "Believe me, all the scientists want to get out there and contribute. For crying out loud, I mean, this is our backyard and so we're sitting there chasing at the bit trying to get into the mix."

It only makes a lucrative offer like one from BP all the more enticing, Shaw says.