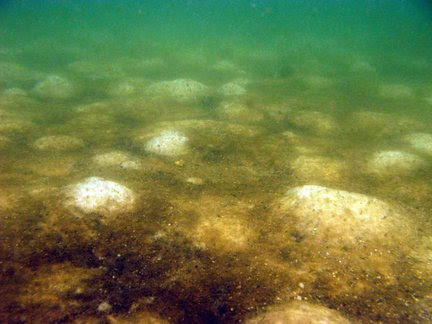 (Press-Register/Ben Raines)Brown material,
seen here on the seabed near Ft. Morgan, Ala.,
during the first week in August,
is not oil, scientists have determined.

Scientists are intrigued by the heavy sheen and persistent clouds of dingy brown water washing up in pockets from Perdido Pass to Petit Bois Island since July.

The residue is not oil, according to chemical analysis. But it probably used to be.

Puzzled by samples collected by the Press-Register since July, Ed Overton, a Louisiana State University scientist conducting oil analysis for the federal government, sent two researchers to accompany the newspaper to areas where the brown material was coming ashore in early August. Water and residue samples were collected from the tip of Dauphin Island to about five miles down the Ft. Morgan peninsula.

“It’s the weirdest thing I’ve ever seen. It’s got some hydrocarbons in it, but it does not match the oil from the Deepwater Horizon,” Overton said, adding that he has received samples collected by federal officials in other places that appear similar. “I have to think it is biological in origin.”

Monty Graham, a marine biologist with the Dauphin Island Sea Lab, said that just because the material coming ashore has a sheen associated with it and contains some of the components of crude does not mean it flowed from the broken well.

“At some level, somebody better define oil. This three letter word is starting to get pretty complicated,” Graham said. “Are we looking at the remnants of oil, of oil that has been worked over by the microbial community? The microbes take what they can, then just leave the parts they can’t eat. That’s likely happening out there on a microscopic level. I’d speculate that’s what we are seeing.”

Overton said he believes that the brown material is likely plankton that ate bacteria that has been consuming some of the oil floating in the Gulf.

"I would call it the biological products that result when microbes degrade oil. That’s a guess on my part. I’ve never seen globs like that in anything,” Overton said. “When the bacteria eat the oil, they multiply. Of course, that’s food for the plankton.”

Scientists say the population of oil-eating bacteria in the Gulf swelled in the presence of millions of gallons of spilled oil. The planktonic community then went into overdrive gorging on the abundant bacteria.

Hydrocarbons are present in all of the samples collected by the Press-Register and the LSU team, Overton said, but he believes they are of a biological origin, as opposed to a “petrogenic origin.”

“It’s some sort of new product coming out of the biological process. I think it is related to the oil, but it is not the oil. That’s my guess,” Overton said. “There was so much oil out there. It didn’t all go away. It has to get converted into something. This stuff is similar to the oils associated with seaweed or the plant privet.”

Overton said that the chemical signature of the material was “unprecedented” in his decades of oil analysis. “Never seen anything quite like it,” he said.

“If I had a nickel for everything about this spill that’s never been seen before ... ” Graham said. “I think that is going to continue to be the case. A lot of unusual things are going to be happening.”