Much Gulf Oil Remains, Deeply Hidden and Under Beaches

New U.S. Gulf oil spill report called "ludicrous."
(From National Geographic / by Christine Dell'Amore) -- As BP finishes pumping cement into the damaged Deepwater Horizon wellhead Thursday, some scientists are taking issue with a new U.S. government report that says the "vast majority" of the Gulf of Mexico oil spill has been taken care of by nature and "robust" cleanup efforts.
In addition, experts warn, much of the toxic oil from the worst spill in U.S. history may be trapped under Gulf beaches—where it could linger for years—or still migrating into the ocean depths, where it's a "3-D catastrophe," one scientist said.
(Oil in a core sample taken from Pensacola Beach, Florida, in early July. (Photograph by Chris Combs, National Geographic)) 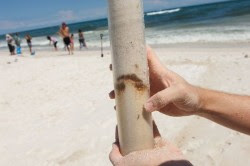 The U.S. government estimated Monday that the Deepwater Horizon spill had yielded about 4.9 million barrels' worth of crude.
On Wednesday a National Oceanic and Atmospheric Administration (NOAA) report said that about 33 percent of the spilled oil in the water has been burned, skimmed, dispersed, or directly recovered by cleanup operations. (See "Gulf Oil Cleanup Crews Trample Nesting Birds.")
Another 25 percent has evaporated into the atmosphere or dissolved in the ocean, and 16 percent has been dispersed via natural breakup of the oil into microscopic droplets, the study says. (Read more about how nature is fighting the oil spill.)
The remaining 26 percent, the report says, is still either on or just below the surface, has washed ashore or been collected from shores, or is buried along the coasts.
Oil Spill Report "Almost Comical"?
For all their specificity, such figures are "notorious" for being uncertain, said Robert Carney, a biological oceanographer at Louisiana State University (LSU) in Baton Rouge.
That's in part because the fluid nature of the ocean means that it's "exceedingly hard" to track oil.
"Water is always moving—if I go out to the spill site tomorrow and look for hydrocarbons, I might not find much, because the oiled water is already gone."
But to accurately figure out how much oil is left, you need to know how much went into the Gulf to begin with, he said.
"Once you start off with that fundamental measure"—the total amount of oil spilled—"being an educated guess, then things aren't that great."
To University of South Florida chemical oceanographer David Hollander, the NOAA estimates are "ludicrous."
"It's almost comical."
According to Hollander, the government can account for only about 25 percent of the spilled Gulf oil—the portion that's been skimmed, burned off, directly collected, and so on.
The remaining 75 percent is still unaccounted for, he said.
For instance, the report considers all submerged oil to be dispersed and therefore not harmful, Hollander said. But, given the unknown effects of oil and dispersants at great depths, that's not necessarily the case, he added.
"There are enormous blanket assumptions."
Oil Trapped Deep in Gulf Beaches
The new report comes after days of speculation about where the Gulf oil has gone. After the damaged well had been capped July 19, U.S. Coast Guard flyovers didn't spot any big patches of crude on the water.
But oil cleanup is mostly getting rid of what's on the surface, Carney said. There's a common perception that "as long as you keep it off the beach, everything's hunky dory," he added.
In fact, scientists are still finding plenty of spilled Gulf oil—whether it's bubbling up from under Louisiana's islands, trapped underneath Florida's sugar-white beaches, or in the ocean's unseen reaches. (See pictures of spilled Gulf oil found just under Florida beaches.)
This week, biological oceanographer Markus Huettel and colleague Joel Kostka dug trenches on a cleaned Pensacola beach and discovered large swaths of oil up to two feet (nearly a meter) deep.
Oil gets trapped underground when tiny oil droplets penetrate porous sand or when waves deposit tarballs and then cover them with sand, said Huettel, of Florida State University in Tallahassee.
(Read more about oil found under "clean" Florida beaches earlier this month.)
Whether microbes munch the oil—the most common way oil breaks down—depends on how much oxygen is available for the tiny organisms to do their work. (See marine-microbe pictures.)
"So far, we haven't seen any rapid degradation in these deep layers," Huettel said, though he noted oil at the top of the sand has been disappearing within days.
With little oxygen, the buried oil may stay for years, until a storm or hurricane wipes away the upper sand layers.
Previous oil spills suggest that the buried beach oil may continuously migrate not only out to sea but also into groundwater, where it can harm wildlife, Huettel said.
Oil-laden groundwater in Alaska following the Exxon Valdez spill, for instance, led to "significantly elevated" death in pink salmon embryos between 1989 and 1993, he said. (Related: "Exxon Valdez Pictures: 20 Years on, Spilled Oil Remains.")
Gulf Oil Microbe Cleanup "Total Bull"

Microbes are not an oil-cleanup panacea either, LSU's Carney cautioned.
For instance, oil-eating bacteria can't stomach asphalt, the heaviest part of an oil molecule and the same material used to pave roads, he said.
The leftover asphalt falls to the seafloor, where another kind of microbe may chew on it—making the molecule shorter and thus more toxic, according to Carney.
"The sentimentality that bacteria turn everything into fish food and CO2 is total bull," he said.
What's more, microbes cherry-pick whatever piece of oil is easiest to process—and on their own time, said Christopher Reddy, a marine chemist at the Woods Hole Oceanographic Institution in Massachusetts.
Counting on microbes to quickly clean up an oil spill is "like asking a teenager to do a chore. You tell them to do it on a Friday, to do it when it's most advantageous, and they do it on a Saturday," Reddy said.
"It can be frustrating that you can't constrain the role of microbes and overall natural cleanup."
Deep-Sea Oil Spills are "Unchartered Territory"
Another "open question" remains, FSU's Huettel noted: What is happening to the oil deep in the Gulf?
For the first time during an oil-spill response, officials used chemical dispersants to break up oil at ocean depths between 4,000 and 5,000 feet (1,200 and 1,500 meters). The dispersant-treated oil bits may have sunk to the seafloor, Huettel said.
In the cold, dark ocean, this mixture of oil and chemical dispersants may be suspended and preserved, causing long-term problems for deep-sea animals, Texas Tech University ecotoxicologist Ron Kendall said during August 4 testimony before the U.S. Congress.
"We have very limited information on the environmental fate and transport of the mixture of dispersant and oil, particularly in the deep ocean," Kendall said.
Some oil fragments are so tiny they can't be seen with the human eye, said the University of South Florida's Hollander. Others are big enough to be gobbled up by baby fish that mistake the oil for food. (See pictures of ten animals at risk from the Gulf oil spill.)
Predicting what will happen to the deep-sea ecosystem is "uncharted territory," said Hollander, who's studying what the oil is doing to deep-sea creatures during a series of research cruises this summer and fall.
"Could be a bottom-up collapse, could be nothing happens," he said. But he suspects a "real large chunk of food chain is being disrupted."
"We're getting into something different than the 2-D petroleum spill" on the Gulf's surface, he added. "All of the sudden you've taken this 2-D disaster and turned it into a 3-D catastrophe."
Posted by John L. Wathen at 10:25 AM