Black clouds over the Gulf:

Black clouds over the Gulf: Is burning the BP oil slick really a good idea? (video)

Hurricane Creekkeeper John Wathen of Alabama flew over the Gulf of Mexico this week with pilot Tom Hutchings of SouthWings to continue documenting the unfolding ecological catastrophe from the BP oil spill.

Leaving the coast of Alabama and looking toward Florida, they saw clear seas. But they soon ran across the first tideline of red oil. About 14 miles out they saw a thin, glossy sheen, and at 38 miles deep streaks of red.

"The color seems to have changed somewhat," Wathen reports. "It's not the bright red it was before; it's more brown. It's as if the dispersant they're putting on it is merely hiding it from sight."

Yesterday the Environmental Protection Agency -- which initially approved the use of the dispersant Corexit -- directed BP to use a less toxic chemical. The move came after EPA released BP testing data that showed areas of significant toxicity in the water where the dispersant had been used.

The closer they got to source, the more oil there was on water -- and the more cloud cover there was above. Wathen says it was as if the spill were creating its own weather pattern.

"Nothing could have prepared me though for what I saw next," Wathen continues. "Looking out across the tops of the clouds, there was one that stood out all by itself -- a long, black, ugly-looking thing. It seemed to come straight up out of nowhere. This is the burn at the source of the BP slick." 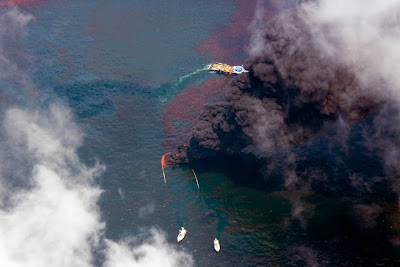 The massive black cloud (pictured above in a photo by Wathen) stretching across the horizon is coming from relatively small fires, he points out. It would take thousands of fires like that to burn all the oil on the surface.

"Is the tradeoff for what we're putting in the atmosphere worth what we're burning off the surface of the Gulf of Mexico?" he asks. "Can we really afford to do that?"

Air tests from the Louisiana coast have already shown a serious threat to human health from the airborne chemicals released by the underwater oil gusher. While BP is now collecting some of that oil, most of it continues to be released to the environment.

As Wathen and Hutchings headed back to land, they witnessed the massive slick -- now estimated to cover about 16,000 square miles -- making landfall along the Louisiana coast. They also saw the booms that had been placed in hopes of stopping the oil being tied up in knots and destroyed by the seas. 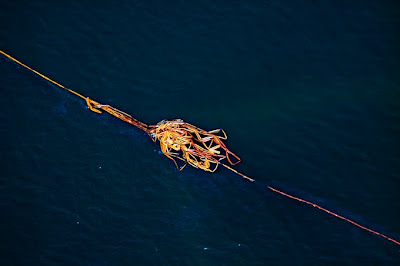 "It's plain to see this is a futile gesture to protect the shorelines of Louisiana, Mississippi, Alabama, Florida, but what can we do? We have to do something," Wathen says. 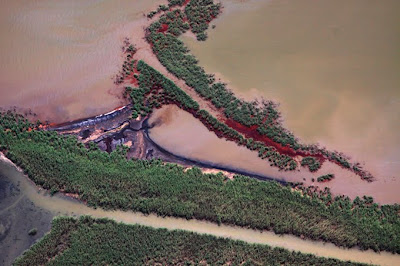 "We need every scientific mind in the country working on this -- and not just those at BP who are trying to protect the resource," Wathen concludes.