This animation of the Gulf of Mexico oil spil was created using actual overflight information and forecast models from the NOAA and Unified Command.
The red dot is the location of the Deepwater Horizon oil well, which exploded on April 20, releasing oil into the Gulf near the Louisiana coast that has yet to be contained. Eleven rig workers died in the explosion.
The animation begins Aprill 22, the day the first image of the spill via flyover was released. 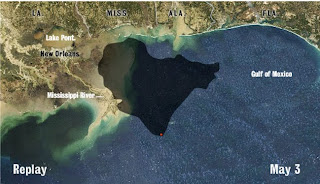