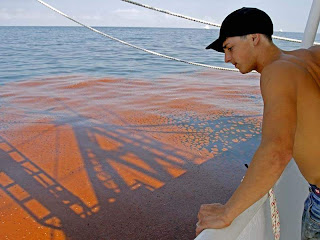 Dusty Chauvin watches as the Mariah Jade passes through a patch of oil dispersant on May 5. Chauvin’s job was to position the boat through the oil while the rest of the crew worked to soak it up.


WASHINGTON | Three undersea robots worked a mile below the Gulf of Mexico’s surface Friday to position a tube inside a leak spewing oil in the Gulf.


That effort continued as President Barack Obama appeared in the Rose Garden, saying he wouldn’t be satisfied until the leak is stopped — and chastising the oil companies for looking to pass the blame to one another.
Officials said they would know within the next 24 hours whether the latest effort to contain the leak is successful.
“And what really matters is this: There’s oil leaking and we need to stop it, and we need to stop it as soon as possible,” Obama said.
He accused BP, Transocean and Halliburton of making a “ridiculous spectacle” of finger-pointing during congressional hearings earlier in the week.
“The American people could not have been impressed with that display, and I certainly wasn’t,” he said. “A full investigation will tell us exactly what happened. But it is pretty clear that the system failed, and it failed badly. And for that, there’s enough responsibility to go around. And all parties should be willing to accept it.”
The federal government is responsible as well, he said, for having too cozy a relationship between the oil companies and the Minerals Management Service, which regulates oil rigs.
“It seems as if permits were too often issued based on little more than assurances of safety from the oil companies. That cannot and will not happen anymore,” he said.
Officials for days have been working to cap the leak, which they say is spewing about 210,000 gallons, or 5,000 barrels, of oil into the Gulf each day.
But an NPR report Friday questioned that amount, saying their analysis of oil spilling into the Gulf finds the spill is far greater than official estimates. NPR findings suggest the BP spill is already far larger than the 1989 Exxon Valdez accident in Alaska.
In that incident, about 250,000 barrels of oil were dumped into Prince William Sound after a tanker crashed.
Up to this point, it is estimated the Gulf spill has dumped 4 million gallons, or nearly 100,000 barrels, into the water. That is using a government and BP figure that the spill is dumping 5,000 barrels a day.
A report in the New York Times on Friday citing scientists also questioned that figure.
Coast Guard Commandant Thad Allen said Friday that while there have been different estimates, even if the spewing oil exceeds the 5,000 estimate, “our mobilization is far beyond that,” he said. “We haven’t been constrained by flow estimates. Ultimately, we’ll have to know the extent.”
The president noted there have been “varying reports” about how large the leak is, “but since no one can get down there in person, we know there’s a level of uncertainty.”
Following the reports, Rep. Edward Markey, D-Mass., sent a letter to BP saying the public needs to know how much oil is spewing into the Gulf and how much might make it to shore.
“I am concerned that an underestimation of the flow may be impeding the ability to solve the leak and handle management of the disaster. We have already had one estimate that grossly underestimated the amount of oil being released and we cannot afford to have another,” he wrote.
BP officials on Friday said while the measurement of 5,000 barrels a day is inexact, it is still the best estimate.
The efforts to mitigate the leak continued Friday on the sea floor, where robots must place a 6-inch wide tube, which is surrounded by a rubber flap, into the leaking 21-inch riser.
The tube is attached to a ship, and if everything goes correctly, the oil will be pumped above. About 85 percent of the spill is pouring from that leak.
The robots are “working under very difficult conditions due to the temperature and pressure and the flow coming out of the pipe itself,” said Mark Proegler, a BP spokesman.
Allen said we could know later in the day whether the effort is successful and that BP is continuing to pursue other options to stop the leak before a relief well can be drilled.
The oil slick is “changing in character” Allen said.
“There’s good and bad,” he said, adding that means shore impacts will be in small bursts.
On Friday, federal regulators approved an experimental plan to inject chemical dispersants into the oil gushing 5,000 feet beneath the sea.
Posted by John L. Wathen at 7:48 AM