TUSCALOOSA | Local environmentalist John Wathen is not someone who usually uses the term “hopeless.”
The oil on the Gulf Coast is seen near the spill site, about 87 miles off the coast of Louisiana.
Submitted photo / John Wathen 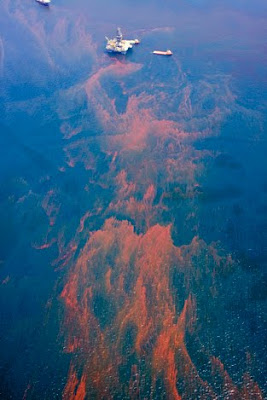 But he said that’s the only way to describe the cleanup that Alabama and other Gulf states face from the BP oil spill, Wathen said.

“It’s bigger than anyone knows,” said Wathen, who has spent hours flying over the Gulf Coast during the last week, taking pictures and videos to document the oil spill before it hits the coast and after.

“Never in my environmental career have I used the word hopeless, but I think this is absolutely hopeless,” Wathen said. “Even if they shut off (the leak) in the near future, we will have years of impact and there will be oil sheen hitting the coast of America for years and years to come.”

Wathen is documenting the environmental impact of the spill for Waterkeeper Alliance, a nationwide environmental advocacy organization dedicated to preserving and protecting water from pollution. The organization has representatives who have mobilized from all over the country to volunteer in the Gulf, Wathen said. The airplane service Southwings has volunteered their planes so that Wathen can document the oil’s damage from the air, taking photos of the Florida, Alabama, Mississippi and Louisiana coasts. The pictures may later be used to demonstrate the damage from the oil spill and hold those accountable for the cleanup, Wathen said.

“Seeing it from the air was really an eye-opener,” Wathen said. “It showed me just how widespread this thing is. It’s out of control.”

While volunteers and help will be needed on the coast, now is not the time for a mass movement of manpower, Wathen said.

“The time has come, but the landfall (of oil) hasn’t hit enough,” Wathen said.

Organizations are busy training volunteers about how to properly clean wildlife and how to deal with hazardous material and substances.

“What is needed more than anything else is pressure on the government for this not to happen again,” added Wathen, who hopes that the U.S. will institute more safety controls on the offshore oiling industry.

Some of Wathen’s photos and video footage have been turned into a video slide show posted on Youtube.com. In the past week, the video has received over 40,000 hits. The video will also be played during Gulf Shores’ the Hangout Concert for the Coast this weekend, which will benefit The Gulf Coast Relief Effort.

To see a slide show of oil spill photos, go to www.youtube.com/watch?v=uG8JHSAVYT0.