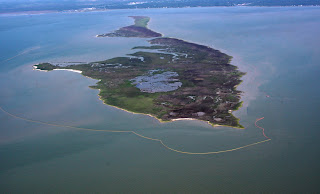 May 5 (Bloomberg) -- Oil is still gushing from BP Plc’s leaking rig, 80 miles from the Gulf Coast.
It hasn’t yet touched shore in the Alabama city of Mobile, though some residents say they can smell the fumes of the approaching slick. Coast Guard officials say it’s onshore elsewhere.

Yesterday, Tom Hutchings, a volunteer pilot for Southwings Inc., took me and photographer John Wathen out over Mobile Bay in a four-seater Cessna to have a look. Hutchings flew over the rig last week: foul weather since has kept him on the ground. Southwings uses aviation for conservation causes.

Just eight miles from the Alabama coast we saw the first visible signs of the oil -- a thin glistening sheen.

The slick tapered into fingerlike tentacles reaching -- and truly heading -- northeast toward the coast. We hear it’s predicted to make landfall within 72 hours.

“The magnitude of it is so much bigger today than it was a week ago,” Hutchings said. “It’s mind-boggling. That sheen was well offshore last week and now it’s basically onshore. You’re sitting and waiting for it now.”

Some of the islands are already circled by thousands of feet of orange boom lines, much of them anchored in a desperate defense against the coming oil filth. 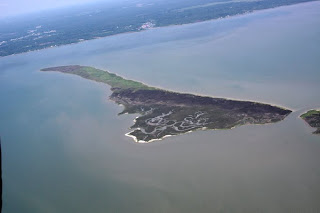 Farther out, 30 miles or so (about halfway to the rig), the sheen has thickened into clumps of reddish-brown froth, dotting the ocean’s surface as far we can see. We ran into thick clouds and had to turn back well before we reached the rig. What we saw from this distance was bad enough. 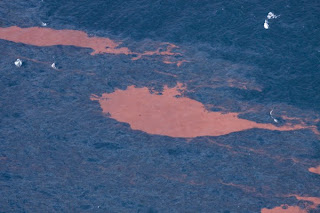 (Mike Di Paola writes about preservation and the environment for Bloomberg News. The opinions expressed are his own.)

To contact the writer of this column: Mike Di Paola in Alabama at mdipaola@nyc.rr.com.