Bulletin from the cause: Emerald Coastkeeper

Bulletin from the cause: Emerald Coastkeeper
May 1, 2010, 1:49 pm | Edit this
Filed under: Uncategorized
Leave a Comment
Day 2 All is quiet so far
May 1, 2010, 1:18 pm | Edit this
Filed under: Uncategorized
I will be starting to document as many wetland streams and estuaries as possible today. Rain and high winds are making containment difficult at best. There seems to be no way to stop this.
More as the day progresses.

Leave a Comment
Leaked report: Government fears Deepwater Horizon well could become gusher
May 1, 2010, 4:46 am | Edit this
Filed under: Uncategorized 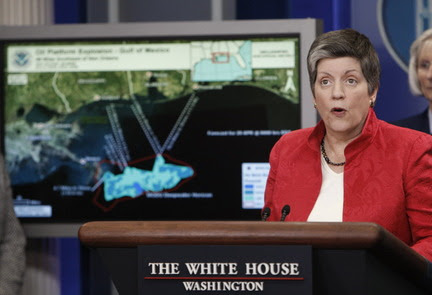 View full size(AP Photo/Pablo Martinez Monsivais)Homeland Security Secretary Janet Napolitano uses a map of the Gulf of Mexico during the daily press briefing at the White House in Washington, Thursday, April 29, 2010. A leaked memorandum obtained by the Press-Register on the unfolding spill disaster in the Gulf makes clear the Coast Guard now fears the Deepwater Horizon well site could be on the verge of becoming an unchecked gusher shooting millions of gallons of oil per day into the Gulf. ‘The following is not public’ document states 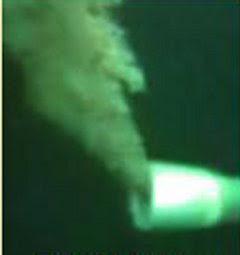 View full size(AP Photo/U.S. Coast Guard)This image provided by the U.S. Coast Guard Saturday April 24, 2010, shows oil leaking from the drill pipe of the Deepwater Horizon drilling rig after it sank. A confidential government report on the unfolding spill disaster makes clear the Coast Guard now fears the well could be on the verge of becoming an unchecked gusher shooting millions of gallons of oil per day into the Gulf. A confidential government report on the unfolding spill disaster in the Gulf makes clear the Coast Guard now fears the well could become an unchecked gusher shooting millions of gallons of oil per day into the Gulf.
“The following is not public,” reads the National Oceanic and Atmospheric Administration’s Emergency Response document dated April 28. “Two additional release points were found today in the tangled riser. If the riser pipe deteriorates further, the flow could become unchecked resulting in a release volume an order of magnitude higher than previously thought.”
Asked Friday to comment on the document, NOAA spokesman Scott Smullen said that the additional leaks described were reported to the public late Wednesday night. Regarding the possibility of the spill becoming an order of magnitude larger, Smullen said, “I’m letting the document you have speak for itself.”
In scientific circles, an order of magnitude means something is 10 times larger. In this case, an order of magnitude higher would mean the volume of oil coming from the well could be 10 times higher than the 5,000 barrels a day coming out now. That would mean 50,000 barrels a day, or 2.1 million gallons a day. It appears the new leaks mentioned in the Wednesday release are the leaks reported to the public late Wednesday night.
“There is no official change in the volume released but the USCG is no longer stating that the release rate is 1,000 barrels a day,” continues the document, referred to as report No. 12. “Instead they are saying that they are preparing for a worst-case release and bringing all assets to bear.”
The emergency document also states that the spill has grown in size so quickly that only 1 to 2 percent of it has been sprayed with dispersants.
The Press-Register obtained the emergency report from a government official. The White House, NOAA, the Coast Guard and BP Plc did not immediately return calls for comment made early this morning.
The worst-case scenario for the broken and leaking well pouring oil into the Gulf of Mexico would be the loss of the wellhead and kinked piping currently restricting the flow to 5,000 barrels — or 210,000 gallons — per day.
If the wellhead is lost, oil could leave the well at a much greater rate.
“Typically, a very good well in the Gulf can produce 30,000 barrels a day, but that’s under control. I have no idea what an uncontrolled release could be,” said Stephen Sears, chairman of the petroleum engineering department at Louisiana State University.
On Thursday, federal officials said they were preparing for the worst-case scenario but didn’t elaborate.
Kinks in the piping created as the rig sank to the seafloor may be all that is preventing the Deepwater Horizon well from releasing its maximum flow. BP is now drilling a relief well as the ultimate fix. The company said Thursday that process would take up to 3 months.

Gulf oil spill
See continuing coverage of the Gulf of Mexico oil spill of 2010 on al.com and GulfLive.com.
To keep track of the Gulf of Mexico oil slick, visit www.skytruth.org or  follow its Twitter feed.
To see updated projection maps related to the oil spill in the Gulf, visit the Deepwater Horizon Response Web site established by government officials.
How to help: Volunteers eager to help cope with the spill and lessen its impact on the Gulf Coast environment and economy.
“I’m not sure what’s happening down there right now. I have heard there is a kink in what’s called the riser. The riser is a long pipe that connects the wellhead to the rig. I really don’t know if that kink is a big restriction. Is that really a big restriction? There could be another restriction further down,” said LSU’s Sears.
“An analogy would be if you have a kink in a garden hose. You suspect that kink is restricting the flow, but there could be another restriction or kink somewhere else closer to the faucet.
BP Plc executive Doug Suttles said Thursday the company was worried about “erosion” of the pipe at the wellhead.
Sand is an integral part of the formations that hold oil under the Gulf. That sand, carried in the oil as it shoots through the piping, is blamed for the ongoing erosion described by BP.
“The pipe could disintegrate. You’ve got sand getting into the pipe, it’s eroding the pipe all the time, like a sandblaster,” said Ron Gouget, a former oil spill response coordinator for the National Oceanic and Atmospheric Administration. 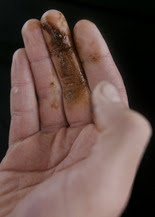 View full size(AP Photo/Patrick Semansky)Oil scooped up from the Gulf of Mexico 17 miles southeast of the South Pass of the Mississippi River is seen on the hand of deck hand Jordan Ellis on the Louisiana coast Friday, April 30, 2010. The oil originated from a leaking pipeline after last week’s explosion and collapse of the Deepwater Horizon.”When the oil is removed normally, it comes out at a controlled rate. You can still have abrasive particles in that. Well, now, at this well, its coming out at fairly high velocity,” Gouget continued. “Any erosive grains are abrading the inside of the pipe and all the steel that comes in contact with the liquid. It’s essentially sanding away the pipe.”
Gouget said the loss of a wellhead is totally unprecedented.
“How bad it could get from that, you will have a tremendous volume of oil that is going to be offgassing on the coast. Depending on how much wind is there, and how those gases build up, that’s a significant health concern,” he said.
The formation that was being drilled by Deepwater Horizon when it exploded and sank last week is reported to have tens of millions of barrels of oil. A barrel contains 42 gallons.
Smullen described the NOAA document as a regular daily briefing. “Your report makes it sound pretty dire. It’s a scenario,” he said, “It’s a regular daily briefing sheet that considered different scenarios much like any first responder would.”

Leave a Comment
Posted by John L. Wathen at 2:51 PM