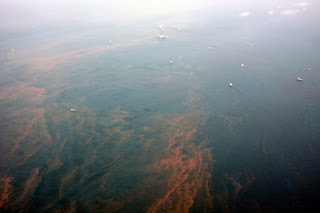 By Noaki Schwartz and Harry R. Weber The Associated Press
( page of 4 )
ON THE GULF OF MEXICO | The deadly blowout of an oil rig in the Gulf of Mexico was triggered by a bubble of methane gas that escaped from the well and shot up the drill column, expanding quickly as it burst through several seals and barriers before exploding, according to interviews with rig workers conducted during BP’s internal investigation.