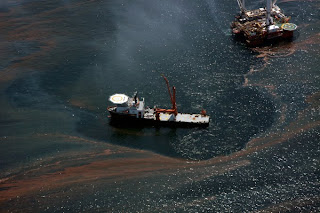 BP says gas hydrates have clogged the device and that it had to be moved. Oil continues to gush.

By Bettina Boxall and Julie Cart, Los Angeles Times
Reporting from Los Angeles and Gulfport, Miss.
From the inception of BP's plan to contain the Gulf of Mexico oil leak with a big metal box, officials have cautioned that the idea was fraught with unknowns and potential problems. No sooner had the 100-ton containment device been maneuvered into place than they were proved right.
BP officials said Saturday that gas hydrates — slushy crystal formations of natural gas and water that form under pressure — had plugged the opening at the top of the box that is supposed to funnel the oil geyser into pipes connected to a ship.


"I wouldn't say it's failed yet. But what we attempted to do last night didn't work," said Doug Suttles, BP's chief operating officer, referring to the Friday night dome placement.Company engineers had anticipated that hydrates clogging the pipe system would be their biggest challenge, but they thought the hole at the top of the metal structure was too large to be blocked. They are trying to figure out whether there is "a way to overcome this problem," Suttles said.
The setback occurred as the Coast Guard reported that tar balls were beginning to wash up on Alabama's Dauphin Island, a Gulf Coast playground three miles south of Mobile Bay.
If the black gobs prove to be oil, it would be the easternmost landfall from the BP oil slick, which so far has proved to be more of a threat to Louisiana and Mississippi. Officials said a half-dozen balls had been found by midday. The substance was being analyzed but is believed to be part of the oil spill.
Town officials closed off the western half of the island to residents last week, part of the region's effort to prepare for the oil's arrival. The Alabama National Guard placed fabric barriers and orange booms offshore in Mississippi Sound.
BP had spent Friday lowering the specially built containment dome, which resembles a squat, 4-story building, from a ship to the gulf floor nearly a mile below. It succeeded in placing the device over the main leak, a crumpled riser pipe that broke during the Deepwater Horizon rig explosion April 20.
Over the weekend, teams planned to assemble piping to connect the dome to a ship that would process the oil and transfer it to a tanker.
But not long after the structure was in place, hydrates formed at its top. A crane positioned on a ship then moved it about 600 feet from the leak, where it is resting on the seafloor while BP tries to devise a remedy.
The hydrates, which fizz when brought to the surface, can be easily dislodged by raising the dome. But BP teams have to figure out how to prevent them from forming again at the leak's 5,000-foot depth.
David Valentine, a UC Santa Barbara geochemist, said hydrates form quickly below 1,500 feet as the water temperature decreases and pressure increases. Oil and gas spurting near the seafloor and mixing with seawater could be particularly conducive to hydrate formation, he said.
Containment devices have been used before, but never at such deep depths. "We're doing things we've never done before and it's difficult to know if they'll work," Suttles said.
At an afternoon news conference, Suttles said six of the 126 people on board the rig at the time of the deadly accident were BP employees, including the vice president for gulf drilling. All six escaped without serious injuries. Eleven rig workers are presumed dead.
Good weather at the end of the week allowed cleanup teams to conduct a number of burn operations, in which they encircle parts of the slick with fire-resistant booms, ignite it and burn it off.
Al Allen, an oil spill expert who has been overseeing the work, estimated 10,000 to 13,000 barrels had been burned off the gulf surface over a three-day period, preventing it from washing ashore. The operations, suspended over the weekend in part because of choppy seas, could resume Monday.
Although the fires send ominous billows of thick black smoke into the air, Allen said most of the combustion products were water vapor and carbon dioxide, which quickly disperse. He also noted that the burns were taking place 40 to 50 miles from shore.
Gulf fishermen, temporarily barred from some of their fishing grounds by the spill, are helping with the burn work. Allen said shrimp boats were particularly good because they could travel at the slow pace needed to conduct the firing.
Coast Guard officials said two oil-coated birds had been cleaned and released. Reports of three dead porpoises and two dead birds were being investigated to see whether they were related to the spill, which is expected to continue to move west off the Louisiana coast, nearing Atchafalaya Bay by Monday.
bettina.boxall@latimes.com
julie.cart@latimes.com
Times staff writer Jill Leovy contributed to this report from Los Angeles.