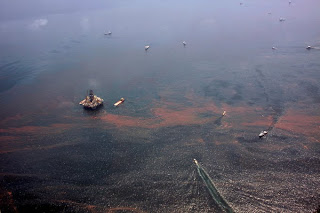 Harry R. Weber and Noaki Schartz, The Associated Press
( page of 4 )
ON THE GULF OF MEXICO (AP) — Icelike crystals encrusting a 100-ton steel-and-concrete box meant to contain oil gushing from a broken well deep in the Gulf of Mexico forced crews Saturday to back off a long-shot plan to contain the leak.

Related Links:
The buildup on the specially constructed containment box made it too buoyant and clogged it up, BP chief operating officer Doug Suttles said. Workers who had carefully lowered the massive box over the leak nearly a mile below the surface had to lift it and move it to the side. Now they're trying to unplug it while they look at other solutions.
More than 200,000 gallons of crude have spewed into the Gulf since a rig exploded April 20, killing 11. The containment box, a method never before attempted at such depths, had been considered the best hope of stanching the flow in the short term.
"I wouldn't say it's failed yet," Suttles said. "What I would say is what we attempted to do last night didn't work."
The blowout was triggered by a bubble of methane gas that escaped from the well and shot up the drill column, expanding quickly as it burst through several seals and barriers before exploding, according to interviews with rig workers conducted during BP's internal investigation.
While the precise cause is still under investigation, the sequence of events described in the interviews provides the most detailed account of the April 20 blast that killed 11 workers and touched off the underwater gusher that has poured more than 3 million gallons of crude into the Gulf.
Portions of the interviews, two written and one taped, were described in detail to an Associated Press reporter by Robert Bea, a University of California Berkeley engineering professor who serves on a National Academy of Engineering panel on oil pipeline safety and worked for BP PLC as a risk assessment consultant during the 1990s. He received them from industry friends seeking his expert opinion.
A group of BP executives were on board the Deepwater Horizon rig celebrating the project's safety record, according to the transcripts. Meanwhile, far below, the rig was being converted from an exploration well to a production well.
Based on the interviews, Bea believes that the workers set and then tested a cement seal at the bottom of the well. Then they reduced the pressure in the drill column and attempted to set a second seal below the sea floor. A chemical reaction caused by the setting cement created heat and a gas bubble which destroyed the seal.
Deep beneath the seafloor, methane is in a slushy, crystalline form. Deep sea oil drillers often encounter pockets of methane crystals as they dig into the earth.
As the bubble rose up the drill column from the high-pressure environs of the deep to the less pressurized shallows, it intensified and grew, breaking through various safety barriers, Bea said.
"A small bubble becomes a really big bubble," Bea said. "So the expanding bubble becomes like a cannon shooting the gas into your face."
Up on the rig, the first thing workers noticed was the sea water in the drill column suddenly shooting back at them, rocketing 240 feet in the air, he said. Then, gas surfaced. Then oil.
"What we had learned when I worked as a drill rig laborer was swoosh, boom, run," Bea said. "The swoosh is the gas, boom is the explosion and run is what you better be doing."
The gas flooded into an adjoining room with exposed ignition sources, he said.
"That's where the first explosion happened," said Bea, who worked for Shell Oil in the 1960s during the last big northern Gulf of Mexico oil well blowout. "The mud room was next to the quarters where the party was. Then there was a series of explosions that subsequently ignited the oil that was coming from below."
According to one interview transcript, a gas cloud covered the rig, causing giant engines on the drill floor to run too fast and explode. The engines blew off the rig and set "everything on fire," the account said. Another explosion below blew more equipment overboard.
BP spokesman John Curry would not comment Friday night on whether methane gas or the series of events described in the internal documents caused the accident.
"Clearly, what happened on the Deepwater Horizon was a tragic accident," said Curry, who is based at an oil spill command center in Robert, La. "We anticipate all the facts will come out in a full investigation."
The BP executives were injured but survived, according to one account. Nine rig crew on the rig floor and two engineers died.
"The furniture and walls trapped some and broke some bones but they managed to get in the life boats with assistance from others," said the transcript.
The reports made Bea, the 73-year-old industry veteran, cry.
"It sure as hell is painful," he said. "Tears of frustration and anger."
On Saturday, the boat with the plumbing equipment for the containment box was about 1.5 miles from the vessel that lowered the box, which company officials hope can capture up to 85 percent of the oil and feed it into a tanker on the surface.
The task became increasingly urgent as toxic oil crept deeper into the bays and marshes of the Mississippi Delta.
A sheen of oil began arriving on land last week, and crews have been laying booms, spraying chemical dispersants and setting fire to the slick to try to keep it from coming ashore. But now the thicker, stickier goo — arrayed in vivid, brick-colored ribbons — is drawing ever closer to Louisiana's coastal communities.
The Coast Guard and BP said Saturday about 2.1 million gallons of an oil-water mix had been collected, with about 10 percent being oil and the rest water. More than 160 miles of boom to contain the oil has been put out and crews have used nearly 275,000 gallons of chemicals to break up the oil on the water's surface.
Posted by John L. Wathen at 12:00 AM