"The Gulf Appears To Be Bleeding:"

Georgianne Nienaber
"The Gulf Appears To Be Bleeding:" Institute for Southern Studies 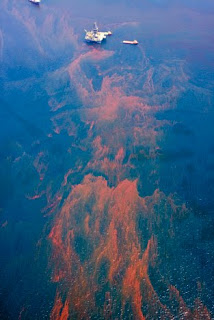 The Institute for Southern Studies (ISS) features a compelling video on its website that documents an overflight at ground zero of the British Petroleum oil catastrophe resulting from the explosion of the Transocean/Deepwater Horizon well platform on April 20. This is the view that cannot be seen from sanitized satellite photos and composite maps depicting the direction and extent of the massive river of oil threatening entire ecosystems in the Gulf of Mexico. Tar balls have already been reported on pristine Dauphin Island, and the damage is escalating daily.

Alabama resident John Wathen and pilot Tom Hutchings of SouthWings flew over the Gulf of Mexico last week to get a first hand look at the river of oil spreading from the site of the BP disaster.


SIS reports:
At nine miles out, they began to smell the oil. At 11 miles, they saw a visible sheen on the water. And at mile 87 off the Alabama coast, they reached ground zero of the disaster -- what Wathen described as a "red mass of floating goo" as far as the eye can see.

"The Gulf appears to be bleeding," he said.

"For the first time in my environmental career, I find myself using the word 'hopeless,'" Wathen continued. "We can't stop this. There's no way to prevent this from hitting our shorelines."

What you will see in this video is tragic, frightening, and almost unbelievable. It could be a trailer for a B horror movie, but it is all too real and flies in the face of positive PR spin flowing from Joint Incident Command that today included the announcement of the release of several rehabilitated birds.

Secretary of the Interior Ken Salazar announced today that Director of the National Park Service Jon Jarvis and Acting Director of the Fish and Wildlife Service Rowan Gould have been dispatched to command centers along the Gulf Coast to help lead efforts to protect coastal communities and natural resources from BP's Deepwater Horizon oil spill.

Jarvis and Gould are among the more than 380 Department of the Interior personnel who have been deployed as part of the oil spill response. A press release issued by Joint Incident Command reports that 10,000 personnel "are currently responding to protect the shoreline and wildlife."

But is it too late to save the Gulf of Mexico, and why is the Obama administration not pulling out all of the stops to to solve this evolving global crisis? Why is Obama waiting for BP to fix it?

"We are continuing to put all hands on deck to support the coordinated response to this spill and to do everything we can to help BP stop its leaks and clean up its spill," said Secretary of the Interior Ken Salazar.

On Friday, Salazar dispatched Dr. Marcia McNutt, the director of the U.S. Geological Survey, to the BP Command Center in Houston to help coordinate the joint efforts of federal scientists who are working with BP engineers.

In a press release that could have been written by the satirical "news" organization The Onion, Joint Command said on Saturday that said the half-dozen tar balls found at Dauphin Island were being sent to a lab for testing to determine their point of origin--as if there were any doubt that the tar came from the BP explosion. Coast Guard chief warrant officer Adam Wine said authorities planned to test the tar, but "strongly suspected it came from the oil spill."

How big is the river of oil? Perhaps bigger than mainstream media estimates. The New Orleans News Ladder is featuring estimates from SkyTruth.

Meanwhile, the Louisiana Department of Wildlife and Fisheries announced more recreational and commercial fishing closures as the oil continued to spread--now west of the mouth of the Mississippi River into prime fishing grounds. Secretary Robert Barham announced the closure of both recreational and commercial fishing in the state territorial seas, and the bordering beaches, extending from the eastern shore of South Pass of the Mississippi River westward to the eastern portion of Atchafalaya Bay at Point au Fer.
Posted by John L. Wathen at 11:34 AM