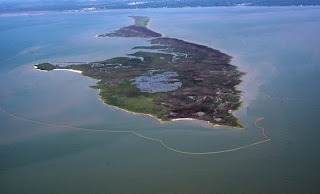 Due to heightened interest in the Deepwater Horizon oil spill, media aircraft have been conducting low flights and landings on Breton National Wildlife Refuge’s Chandeleur Islands. These flights and landings threaten the very birds that the media are covering and that the public is concerned about.

The regulation states: “The unauthorized operation of aircraft, including sail planes and hang gliders, at altitudes resulting in harassment of wildlife, or the unauthorized landing or take-off on a national wildlife refuge, except in an emergency, is prohibited. National wildlife refuge boundaries are designated on updated FAA aeronautical charts.”

This applies to all refuges, but at this point especially to Breton National Wildlife Refuge, a system of coastal islands off the coast of Louisiana, which has been temporarily closed to the public to allow workers to assess and repair any damage and for the protection of the wildlife there.

The flights and landings frighten the birds, which include brown pelicans, reddish egrets and terns, many of whom are in their nesting season. This causes them to leave their nests, which exposes their eggs to predators such as sea gulls, and upsets the delicate ecological balance that the refuge is charged with maintaining. In some cases the birds become so upset they abandon their nests.