The Gulf Oil Spill From an Artist's Perspective (PHOTOS)

People ask what it's like, and all I can say is, "It's worse than you can imagine."
And I don't really want to talk about it, because there is nothing I can really tell them, except perhaps to relate small personal recollections or impressions, and those disappear so quickly, or become cliché.
And no matter what you say, you know that they won't understand, because to understand means to question every piece of the normal existence we take for granted.
Suddenly I have a glimpse of the mindset of veterans who return from the trenches, unable to remix in society after their insight into the frailty of "normal."
Other soldiers are the only ones with whom you can discourse on the topic, as only they have shared your vision of hell. And you want to check in with them often, needing their observations and interpretations to keep your perspective updated. And you need to know they are still there, because in "wartime," your comrades are all you can depend on.
As mayhem invades the perceptions, contact with the normal world becomes increasingly bizarre. To see people pursue their daily activities blithely ignorant of how the world has changed strains patience. Natural systems have a tipping point beyond which the components cannot recover. Those are the systems that support life on earth, and this feels like the event that will push the Gulf of Mexico over the horizon into being a dead ocean, and like any cancer, that will metastasize. The oil will bleed out of the Gulf into the Gulf Stream and work up the east coast of the USA and over to Europe. The Georges Bank, one of the greatest food sources in the world, already severely compromised, will be decimated. Imagine the added burden to the world's food production of trying to feed all of the people that had eaten from the sea. As we deplete the easily accessible oil stores, extraction will range further afield, pushing the limits of technology, increasing the incidence of catastrophic accidents.
This is the beginning of the end. The world of easy energy is over, and as we cling desperately to that world, and have more accidents, the crash accelerates. From here, unless we were to take extreme care, the natural systems that sustain us will cease to function, and we will have to replace those functions with man-made fixes, which will be both expensive and ineffective.
The first time you travel to the site, and veterans say, "you see the oil there?" you squint and look, and can't say you do, because you don't. It covers everything, and without seeing the edge, that does not compute. As someone that has spent much time on the water, the ocean looked strange, but until John Wathen said (in that pure, simple, Alabama accent) "It looks like a layer of Saran Wrap over everything," I could not find words to describe what I was seeing. And then you see a ship cutting through the oil leaving a wake though which the water is visible.
After flying for an hour over open ocean, you arrive at "the source," and are first struck with the surreal aspect of so much activity over such an empty ocean, each operational module acting in its own seemingly random, separate world. And as the pretty white Coast Guard plane passes just below, you thank the heavens for the AWACS circling constantly above, monitoring and regulating the air traffic. The source generates its own weather, so it may be hazy after flying through clear weather, or vice-versa. And the currents push the plume of oil emanating from the well-head first one way, then the other. Giant tidelines form walls of oil cross the ocean, and the dead and dying aquatic wildlife seem to drift there (if they are not captured by the skimmers and burned.) 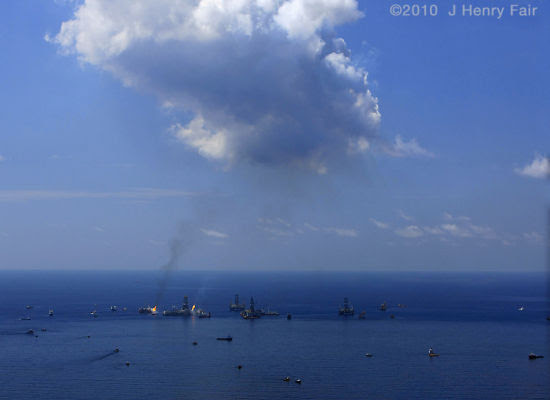