← BP has stopped using dispersants in the Gulf – for now

We checked in with the Unified Command press shop today, to verify that BP still is applying no dispersants in the Gulf. 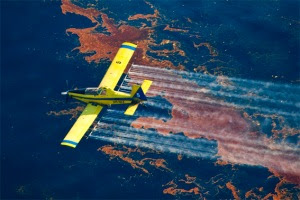 The staffer told us that no dispersants have been applied sub-sea since July 15. This jives with their response to us last week. However, the staffer (same one we talked to before – from USDA), could not say when surface/aerial dispersants application had stopped. This does not exactly jive with what they told us last week.
Last night’s official numbers were the same as they’ve been in every daily update since July 15:


“Approximately 1.84 million gallons of total dispersant have been applied—1.07 million on the surface and 771,000 sub-sea.”


“It’s been a few days. It certainly has been more than about 48 hours …. I’m asking the BP guys if they’ve monitored when it was used since that point [last week], and they cannot remember. And so we very well could not have used dispersants since the last time you called.”

He could not provide a specific date of the last dispersant application, then he referred us to the daily updates and stated “We’re only as good as those numbers”,  which last week he said weren’t reflecting when aerial/surface dispersant use stopped.
Major media — please follow up on this — it’s a straightforward query and there’s no reason for no answer. Demand answers. Of course someone in the federal government must know when BP applies dispersant and when they don’t — and if no entity in the federal government knows, that’s a huge problem.
We need total transparency with the use of this chemical brew in the Gulf.