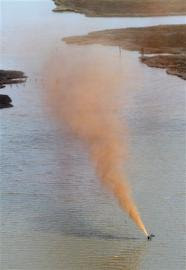 By KEVIN McGILL (AP) –
NEW ORLEANS — A tow boat slammed into an abandoned well north of a bay already hit by crude from the Gulf oil spill, sending a plume of oil and gas spewing into the air Tuesday.
The boat hit the wellhead near Mud Lake early in the day. No one was hurt.
The well is abandoned, the Coast Guard said, and a company called Environmental Safety and Health Inc. hired for the cleanup was on site by the afternoon.
Retired Coast Guard Adm. Thad Allen, the government's point man for the massive BP spill in the Gulf of Mexico, said 6,000 feet of protective boom was placed around the site. The boom and skimming equipment were already nearby because of the Gulf spill.
Chief Petty Officer John Edwards said a strip of oil 50 yards wide and a mile long was spotted on the water near the well. The extent of the damage beyond that was unclear.
Lt. Brian Sattler said a helicopter was dispatched to survey the area, which is accessible only by boat.
Mud Lake is part of a network of bayous and lakes north of Barataria Bay, an ecologically sensitive coastal estuary where authorities have been fighting waves of oil from the spill that started in the Gulf when the offshore oil rig Deepwater Horizon exploded April 20.
Jefferson Parish Councilman Chris Roberts said he was confident the leak and spill would be stopped quickly.
"This likely can be contained today," he said in an e-mail Tuesday.
He was concerned, however, because the leak stopped water traffic leading into Barataria Bay. That could hamper efforts to send out oil-fighting equipment that was moved inland ahead of last week's Tropical Storm Bonnie.
"This leaves us vulnerable until we can reopen traffic and get resources back out," Roberts said.